Film / The Toast of New York 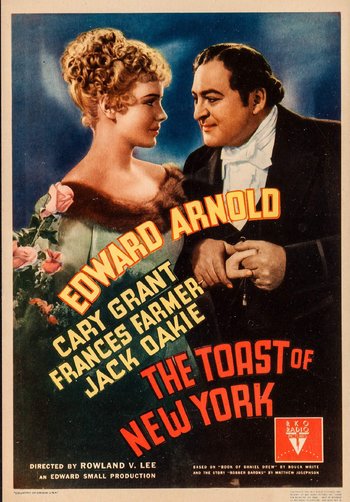 The Toast of New York is a 1937 film directed by Rowland V. Lee.

. Fisk (Edward Arnold) and his business partner Nick Boyd (Cary Grant) start out in the Civil War by smuggling cotton out of the Confederacy and into the Union, something that could have gotten them arrested in the north and shot in the south. They make a killing, but their bumbling sidekick Luke (Jack Oakie) invested their money in Confederate bonds, and the gang loses everything.

Fisk bounces back, though, largely bluffing his way into control of the Erie Railroad and fighting with rival financier Cornelius Vanderbilt. Meanwhile, Fisk falls in love with a showgirl, Josie Mansfield (Frances Farmer). Fisk builds up Josie as a stage star while he becomes a titan of finance, but Josie winds up falling in love with Nick instead. Fisk for his part becomes steadily more and more angry with the contempt that the New York financial establishment shows for Josie. He resolves to destroy them all and make himself the richest man in America, by literally buying all the gold in the United States and cornering the gold market.

Cary Grant broke out as a huge star in 1937 with The Awful Truth; this film was just about the last time he was billed behind anyone else. 45 years after this movie Frances Farmer would be the subject of another Very Loosely Based on a True Story biopic, Frances.