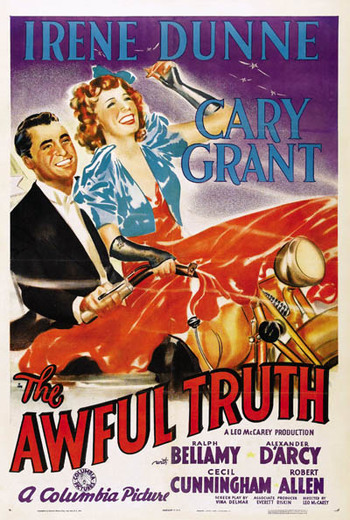 Dan: Are you sure you don't like that fella?
Lucy: Like him? You saw the way I treated him, didn't you?
Dan: That's what I mean. Back on my ranch, I got a little red rooster and a little brown hen and they fight all the time too, but every once in a while they make up again and they're right friendly.
Advertisement:

Released in 1937, this Screwball Comedy is the third film version of Arthur Richman's 1923 play of the same name. It was directed by Leo McCarey and stars Irene Dunne and Cary Grant as Lucy and Jerry Warriner, a bickering married couple. The supporting cast includes Ralph Bellamy, Alexander D'Arcy, Cecil Cunningham, Molly Lamont, and Esther Dale.

Jerry comes home from a mysterious trip (the film never says where he actually went), and lies, saying that he went to Florida on business. At home, he finds Lucy in the company of her music teacher under suspicious circumstances. After Lucy finds out Jerry lied about going to Florida, they file for divorce.

The divorce decree is granted, to be effective in 90 days, and both Lucy and Jerry move on to other romantic partners. However, they still have to decide who gets custody of Mr. Smith, their dog. This winds up bringing Jerry and Lucy together again, and romantic sparks fly.

Nominated for six Oscars, only one of which it won (Best Director for Leo McCarey). Placed in the National Film Registry. Not to be confused with the Awful Truth trope.