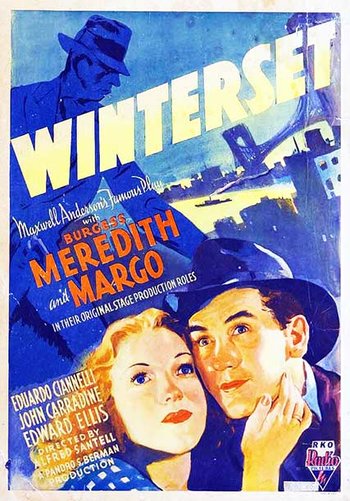 Winterset is a play written by Maxwell Anderson in 1935 and adapted for the big screen, with some emendations to the plotline, the following year. The film version was directed by Alfred Santell and stars Burgess Meredith in his screen debut.

In 1920, an Italian immigrant named Bartolomeo Romagna is framed for robbery and murder and sentenced to death in the electric chair. Fifteen years later, it is confirmed via a university report that the case against Romagna was fraudulent; he didn't do it, and his wife testified he was at home the whole time.

The real offender was a thug named Trock Estrella, who stole Romagna's car, and the victim was shot from said car. The police nailed Romagna because the car was recognized and later found abandoned on a highway. Trock was never proven guilty. The driver of the car, a boy named Garth Esdras (of Jewish descent), kept quiet of his role in this, for fear of his own life — but has to live with a Guilt Complex for many years.

In the present, Romagna's son, Mio, is looking for the real murderer, to clear the name of his father. Trock is looking for Mio, to remain out of sight, while he also threatens Garth in case he should reveal anything. Garth lives in hiding with his father and younger sister, Miriamne. The judge, who sentenced Bartolomeo, also lives with immense guilt, taken Up to Eleven because Bartolomeo, knowing his own innocence, cursed him during the trial. The judge has resigned his post and has partly gone mad because this conscience, knowing Bartolomeo´s eyes are on him wherever he goes.

In the end, Trock manages to corner Mio, who has taken a shine to Miriamne, and kills both of them. He also gets the better of the judge. The film adaptation spared them, however.