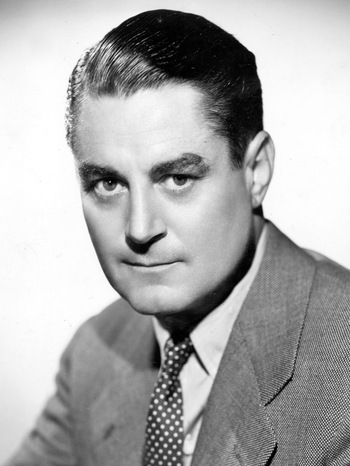 Cary Grant's "older brother" in more ways than one.
"I love when people laugh. I love when they cry, I like a story to say something, and I hope the audience feels happier leaving the theatre than when it came in."
Advertisement:

Thomas Leo McCarey (October 3, 1898 – July 5, 1969) was an American film director, producer, and screenwriter who was especially prominent in The Golden Age of Hollywood.

Born in Los Angeles, McCarey initially studied to be a lawyer but by his own admission wasn't very good at it. He eventually decided his true passion was in show business instead, and in 1919 found work as a writer and gagman for Tod Browning and Hal Roach studios. During The Silent Age of Hollywood, McCarey was highly regarded as a comedy director and writer. Most notably, it was he who first paired Laurel and Hardy together. When sound arrived, McCarey continued to direct many comic performers such as W. C. Fields, Harold Lloyd, and most notably the Marx Brothers in Duck Soup.

However, McCarey was interested in making his own kind of films, dealing with more serious subjects (albeit with elements of comedy and satire involved). He considered Ruggles of Red Gap (Charles Laughton's Breakthrough Hit) his first major film. 1937 would prove to be the height of McCarey's personal and professional accomplishment; in that year, he made arguably his two greatest films, one of which was nominated for six Academy Awards and won him Best Director. Oddly enough, that film (The Awful Truth) was considered by McCarey himself to be lesser of the two, while the other (Make Way for Tomorrow) he regarded as his masterpiece. The Awful Truth, however, would prove to be of greater impact, because it was the star-making role of Cary Grant, who was already well-known and well-regarded but had not yet been established as a romantic male lead. McCarey played no small part in that, and he modelled Grant's distinct personality of a suave, elegant and somewhat aloof charmer on himself, including his own dressing style. The physical resemblance between Grant and McCarey likewise helped the transition. In other words, McCarey was largely responsible for Grant's Signature Style, which the actor would continue to employ throughout his career.

McCarey was the among the least prolific of all major Golden Age directors. He very early on insisted on making films his own way, and more or less worked as an "independent" within the studio system. He continued to direct such iconic films as the much-remade Love Affair (remade by McCarey himself as An Affair to Remember) and Going My Way (which earned him his second Best Director Oscar). His reputation declined after the war, with some of his films such as Good Sam made for Republic studios not finding attention (even if it would be seen as a masterpiece by admirers later on). His most controversial film by far was the Red Scare-themed 1952 drama My Son John, which tarnished McCarey's reputation owing to his support for the anti-communist activities run by HUAC during the blacklist era. The film was further hampered by its Troubled Production, including leading man Robert Walker's accidental off-set death midway into the shoot. McCarey would make just three more films afterward before retiring.

McCarey was much admired in his own time by his peers, including Jean Renoir, Alfred Hitchcock, and John Ford among many others. His film Make Way for Tomorrow was loved by Orson Welles as well as Yasujiro Ozu (whose own Tokyo Story was inspired by it). Despite his relative obscurity, his works continue to be touchstones for modern-day filmmakers, most notably Wes Anderson.