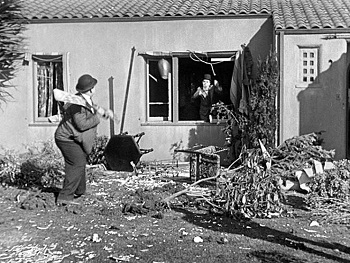 Here, Stan and Ollie are going door-to-door, trying to sell Christmas trees in suburban Los Angeles. They bumble their way around until they wind up greatly irritating one particular homeowner (played by frequent L&H antagonist Jimmy Finlayson); Stan keeps getting his tree stuck in said homeowner's door, and they have to keep ringing the bell to get it out. When Stan rings the bell again and tries to get an advance order on a Christmas tree for next year, the homeowner snaps and wrecks their tree. Stan, in retaliation, vandalizes the homeowner's front door. The homeowner starts slicing up their clothes. This starts a rapidly escalating war of destruction in which Stan and Ollie set about wrecking the man's little bungalow and garden while the homeowner dedicates himself to annihilating Stan and Ollie's trees and their Model T Ford.

Big Business is one of Laurel and Hardy's best-remembered silent shorts. It earned a place in the National Film Registry.