Film / An Affair to Remember 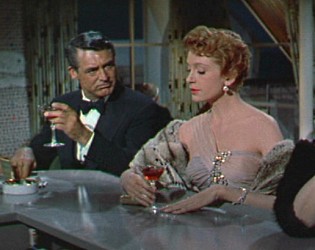 An Affair to Remember (1957), starring Cary Grant and Deborah Kerr, is one of the all-time classic Hollywood romances.

A remake of Love Affair (1939) by the same director, Leo McCarey, An Affair to Remember tells the story of Terry McKay, a nightclub singer from Boston who's engaged to a rather wealthy fellow who wants to turn her into a proper lady of Society. Returning from a solo trip to Europe on an ocean liner, she meets Nicolo "Nickie" Ferrante, a notorious playboy who has just got engaged to the heiress Lois Clark. They begin to develop feelings for each other, but decide that they should avoid each other due to their respective engagements. After Fate throws them together time and again, the liner makes a stop in Villefrance, where Nickie invites Terry to come with him and visit his grandmother Janou. It is on this visit that Terry's eyes are opened to who Nickie truly is, an artist with a gentle soul who adores his Grandmother. As Janou plays the piano and Terry sings the title song (in French), their eyes meet, and they can't deny their feelings anymore. That night, on the deck of the ship, they kiss. On the last night they throw caution to the wind, dancing together on New Year's Eve. They move out to the deck, where they make plans to meet again in six months on the top of the Empire State Building. If they still want to be together, they'll find some way to make it work.

The six months pass, and Nickie arrives at the top of the Empire State Building. Terry, anxious to meet him, jumps out of the cab and begins to run, only to be mowed down by a passing car. Nickie, unaware of what has transpired, feels she has abandoned him and sinks into a depression. Terry, paralyzed from the waist down, gets a job teaching music. The latter half of the movie contains some truly heinous sequences involving singing children that most viewers skip over nowadays. One night, they run into each other at the ballet, each escorted by their respective significant others. They exchange an awkward "hello", which spawned one of the most immortal lines in film: "All I could say was 'hello'!" Terry laments.

A year after they first met, on Christmas, Nickie stops by to bring Terry his grandmother's shawl. Terry understands the significance of this... Janou had promised the shawl to her, and from this, she knows that Janou has passed away. Terry discovers that Nickie has been painting to support himself, and that he painted her wearing that shawl. He didn't want to part with it, he said, but a young crippled woman came into the shop and liked it, he said, so he gave it to her. As he says this, a flash of understanding crosses her face. Seeing it, and realizing for the first time that she has not risen from the couch, Nickie crosses the room and throws the door open, only to see the painting on the wall. Within seconds he has her in his arms, whispering, "Why didn't you tell me? If it had to happen to one of us, why did it have to be you?" in a line that, had it been delivered by anyone other than Cary Grant, would have been chock full of Narm. She tearfully responds, "Oh, darling, don't worry, darling. If you can paint I can walk... anything can happen, don't you think?"