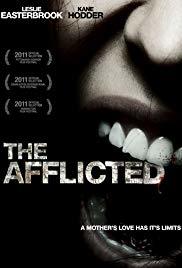 The Afflicted is a 2011 American horror film featuring Kane Hodder.

Maggie is a mentally unstable woman whose husband is about to leave her. After killing him, she descends into utter madness, obsessing over a local televangelist and horrifically tormenting her children. Her abuse is worst at her daughter Carla, whom she regularly tortures and pimps out. Carla commits to escaping, but this tale is doomed to end in tragedy.

Not to be confused with Afflicted.