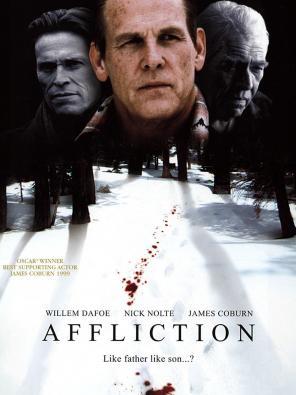 Affliction is a 1997note it didn't get its American debut until December 1998, and went into wide release in January 1999 drama film, written and directed by Paul Schrader. It's an adaptation of the 1989 novel by Russell Banks.

Lawford is a tiny town in New Hampshire's Great North Woods. It's so small it has just one part-time police officer, Wade Whitehouse (Nick Nolte). While Wade is well-liked, everyone knows he's hit a rough patch in his life. He lives alone in a trailer house, drinks on the job and is going through a bitter divorce and custody battle for his young daughter with his wife Lillian (Mary Beth Hurt). He's also haunted by memories of his childhood, when he suffered horrible physical and verbal abuse from his father Glen (James Coburn). Wade is still close to his brother Rolfe (Willem Dafoe), who's a history professor at Boston University. Rolfe also narrates the story. Wade plans to marry his girlfriend Margie (Sissy Spacek) once his divorce goes final.

Lawford gets shaken up when a union boss from Boston goes deer hunting with Wade's friend Jack Hewitt (Jim True-Frost) and dies in an accidental shooting. When Rolfe suggests the death might have been murder, Wade does some investigating of his own and starts to suspect that Jack pulled the trigger as part of a plot involving some prominent people in town. But Wade's personal life goes into further turmoil when his mother dies and he has to start taking care of his father, who's gotten older but is still the same Jerkass who tormented Wade when he was growing up.

Coburn's performance as Glen was universally praised and ultimately earned him an Academy Award for Best Supporting Actor.