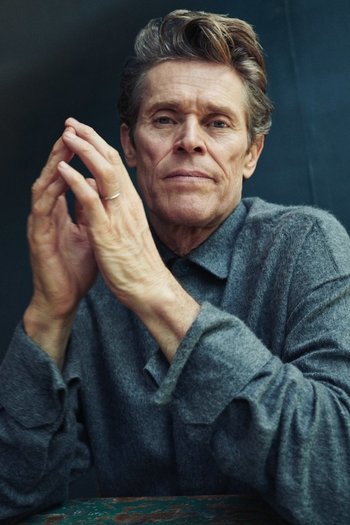 You know, he's something of an actor himself.
"One of the pleasures of being an actor is quite simply taking a walk in someone else's shoes. And when I look at the roles I've played, I'm kind of amazed at all the wonderful adventures I've had and the different things I've learned."
Advertisement:

William James Dafoe (born July 22, 1955 in Appleton, Wisconsin), known professionally as "Willem" Dafoe, is an Academy Award-nominated American film, stage, and voice actor, and a member of the experimental theater company The Wooster Group. He first got major attention in The '80s, appearing in a number of controversial, cult, and edgy films, including The Loveless, Streets of Fire, and To Live and Die in LA. His role as Sgt. Elias in Platoon would net him his first Oscar nomination.

His first major leading role was Jesus in The Last Temptation of Christ, where even though he had not yet been established for playing villains, his unusual features were highly remarked upon. After watching Dafoe's performance in the film, Sergio Leone was heard to remark "That's not the face of our Lord. It's the face of a psychopath." Critics, though, generally praised his performance, and Dafoe credits it for starting his interest in being a "director's actor", i.e. working with major auteurs and roles that interested him. It stands out in either case, as one of the very few films where he plays the main lead when the majority of his career after that has been as a character actor and supporting actor. He found himself typecast as villains, while occasionally doing character turns, and in other cases appearing in small scene-stealing cameos (such as as the gas station attendant in existenz).

He became obscure in The '90s, but returned to mainstream attention when he appeared in the highly successful Spider-Man where he turned in a memorable performance as Norman Osborn and the Green Goblin. This was his first blockbuster role, which made him a mainstream success, and for the first time, a household name. Since then he's appeared in a number of more prominent performances, as well as finding himself in demand for voice-over work (while many note his unusual features, his voice is equally memorable and distinct). In 2013, he provided the voice and motion capture for Nathan Dawkins in the video game Beyond: Two Souls with Elliot Page. He also became part of Wes Anderson's stock company, starring in The Grand Budapest Hotel in 2014 along with many well-known actors/actresses.

He has been nominated for the Academy Award for Best Supporting Actor three times— for Platoon in 1986, for Shadow of the Vampire in 2000 and for The Florida Project in 2017. In 2019, he received his very first Best Leading Actor Academy Award nomination for portraying Vincent van Gogh in At Eternity's Gate.

His wife since 2005, Giada Colagrande, is an actress and film director in her own right.

Also, his name sounds like a frog talking to a parrot.

"YOU KNOW HOW MUCH I'VE SACRIFICED?!"
"Strong enough to log off from TV Tropes, too weak to do it!"