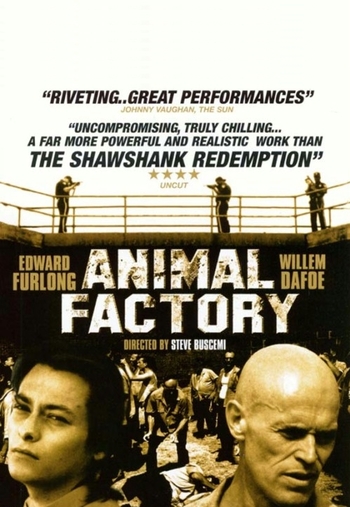 Animal Factory is a 2000 prison drama directed by Steve Buscemi and starring Willem Dafoe, Edward Furlong, Danny Trejo, Mickey Rourke, Tom Arnold, Seymour Cassel, John Heard, and Buscemi himself in a minor role. The film is adapted from The Animal Factory by Edward Bunker, who plays a brief role in the film and wrote the screenplay. The film is notable for its authentic and unflinching portrayal of prison life.

Spoiled middle class young man Ronnie Decker (Furlong) is given a sentenced to 10 years in prison for drug dealing. Local gang leader Earl Copen (Dafoe) quickly takes Ronnie under his wing and forms a kinship with him, even helping Ronnie with his case. With Ronnie looking to be released due to both good behavior and flaws in the investigation and Earl due for parole, the two seem to be headed on their way out. However, when a fight with local rapist Buck Rowan (Arnold) ruins their chances of leaving legitimately, Earl forms a risky escape plan so the two of them can finally leave the prison.