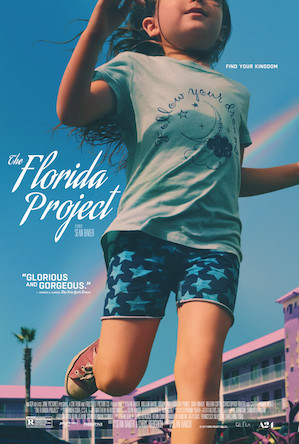 The Florida Project is a 2017 drama film, directed by Sean Baker, who also wrote the screenplay with Chris Bergoch. It stars Willem Dafoe and an Amateur Cast consisting of Brooklynn Kimberly Prince, Bria Vinaite, and Valeria Cotto.

The film follows Moonee (Prince), a six-year old girl, and her mother, Halley (Vinaite) living in a cheap Kissimmee motel called the "Magic Castle", run by Bobby Hicks (Dafoe), who allows them and others living in poverty to remain in the motel as "extended-stay" guests.

During their summer break, Moonee and her friends wander around the run-down area with little-to-no supervision, embarking on adventures fueled by either their own sense of imagination or mischievousness. At the same time, Halley, having difficulty in keeping a job, desperately looks for ways of paying rent, even if it means resorting to less-than-legal means.

The title of the film was taken directly from Walt Disney World, as during its early pre-development, Walt Disney used "The Florida Project" as a Production Nickname.