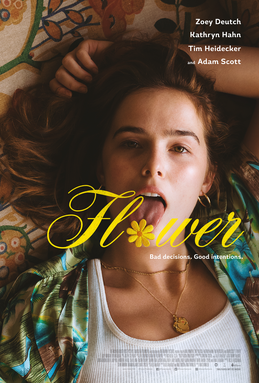 Flower is a 2017 dramedy directed by Max Winkler.
Advertisement:

Seventeen-year-old Erica Vandross (Zoey Deutch) propositions pedophilic men in her town before blackmailing them in order to save money for her father's bail. When her mother Laurie (Kathryn Hahn)'s boyfriend Bob Sherman (Tim Heidecker) brings his son Luke (Joey Morgan) home from rehab to live with them, Erica realizes that Luke is hiding something about a high school teacher in town (Adam Scott)...and it's a problem she can help him with.