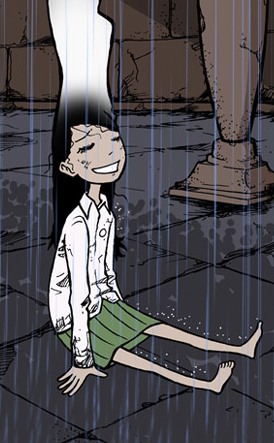 Those occasions when people are happy to be rained upon. Perhaps there was a drought, perhaps it was too hot, or perhaps the protagonist just enjoys Singin' in the Rain. In Fisher King situations, may indicate the defeat of the Big Bad.

Compare Redemption in the Rain, Romantic Rain and Spoofing in the Rain. Contrast Gray Rain of Depression and It Always Rains at Funerals. Not to be confused with the idol group of the same name in Pretty Rhythm Rainbow Live.