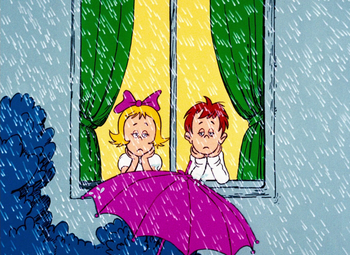 Come again another day,
All the Tropers want to play.
Advertisement:

Nothing spoils plans for a day out like that day out being overcast and pouring down rain.

Often a form of Breather Episode, a common situation for series such as sitcoms, slice-of-life shows, and cartoons featuring children as its main cast. A rainy day forces the cast to remain indoors when they would much rather be outside. It forces them to find alternative entertainment. Depending on the severity of the storm, the electricity may go out and force them to find non-electronic forms of entertainment.

This can also be used more seriously for character development if, for instance, two characters are stuck in whatever shelter is handy at the time the storm hits. Can also cause a bit of Cabin Fever in some characters.

In media made in Japan, rainstorms are frequently substituted with typhoons.

This trope is, in essence, when the plot for an episode is derived from bad weather either causing the characters to be unable to go outside or having to find some place to get shelter. If there is An Aesop about the untapped forms of entertainment available that don't require electricity or outdoor sports, the most popular activity is reading — in which case, Portal Books may appear.

Snowed-In is the more extreme variation of this trope.

When the weather is an active menace, see Hostile Weather, which may turn the setting into a Closed Circle.

See Caught in the Rain and its related tropes for one form this sort of situation can take. Compare and contrast Cue the Rain. See also Cold Snap, for the snow equivalent.

Not to be confused with It Was a Dark and Stormy Night.