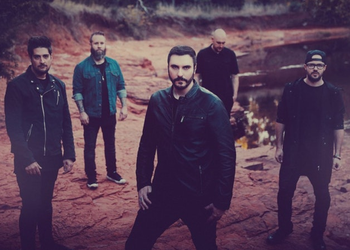 is an American Hard Rock and Alternative Metal band formed in 1998.
Advertisement:

The band has released six albums to date and were considered one of the major Alternative Metal successes of the 2000s, led by lead singer Ben Burnley's emotive tenor. In the summer of 2010, they went on hiatus so Ben could address his health. In August 2011, it was revealed that Ben fired Fincke and Klepaski over the planned release of a remix for "Blow Me Away" to be included on a greatest hits album. In 2013, Benjamin Burnley won a lawsuit against Fincke and Klepaski and gained the rights to the "Breaking Benjamin" moniker. The band returned with a completely new lineup and released their fifth record Dark Before Dawn on June 23, 2015, and the sixth, Ember, in early 2018.