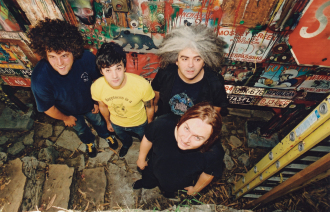 The Melvins were started in 1983 in Montesano, Washington by Roger "Buzz" Osborne, Matt Lukin, and Mike Dillard, who all attended the same high school. The band started out by playing a cross of Jimi Hendrix and Cream covers along with a few hardcore punk songs. Eventually, Mike Dillard left the group, and the band recruited Dale Crover (who would later play drums on a couple of songs on Nirvana's first album Bleach) to be on drums. Shortly after that, the group relocated to Dale's parents' house in Aberdeen, and their sound changed considerably with the decision to slow down their music after they heard Side B of Black Flag's My War. In 1986, the band released their first EP, Six Songs, followed by their debut a year later. The band had a rotating cast of new members, including Shirley Temple's daughter Lori "Lorax" Black on bass guitar. The band released a series of albums, splits, and EP's over the next few years that wound up being extremely influential to multiple artists and genres of music; bands like Nirvana, tool (who are personal friends with the band), Eyehategod, Neurosis, Mastodon, and Boris (who took their name from a Melvins song) cite them as influences.

Tropes that apply to the Melvins: