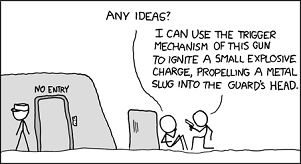 Why don't we just shoot him instead? Oh, wait...
Sir Humphrey Appleby: Prime Minister, I must protest, in the strongest possible terms, my profound opposition to a newly instituted practice which imposes severe and intolerable restrictions upon the ingress and egress of senior members of the hierarchy and which will in all probability, should the current deplorable innovation be perpetuated, precipitate a constriction of the channels of communication and culminate in a condition of organisational atrophy and administrative paralysis, which will render effectively impossible the coherent and coordinated discharge of the function of government within Her Majesty's United Kingdom of Great Britain and Northern Ireland!
PM Jim Hacker: ...You mean you've lost your key?
— Yes, Prime Minister
Advertisement:

A joke based on describing something mundane using such technical language that it takes the audience a while to work out what's being talked about (though a Translator Buddy usually catches it right away).

Mostly limited to Speculative Fiction, where it can be seamlessly slotted into the standard Expospeak, but occasionally turns up in other genres, especially when the characters are meant to be especially intelligent or academic, such as scientists or doctors.

Sometimes used as a form of Unusual Euphemism or to facilitate an Oops... I Did It Again plot where someone assumes the technical explanation refers to something much more serious than it really does.

Can be used to implement a Tomato Surprise, ("Their only weakness is dihydrogen monoxide!") or serve as a MacGuffin as the hero engages in an Evidence Scavenger Hunt to work out what the Expospeak really means. (For example, the hero is told that the Monster of the Week is a "lycanthrope", and then has to spend the next few scenes doing research to discover that "lycanthrope" is another word for "werewolf.") This second variety is dangerous, as you often run the risk of making the hero look like a complete moron if the Expospeak isn't impenetrable enough.

The number one all-time most common Expospeak Gag is, "He suggested that you perform an anatomically impossible act."

The following is a semi-comprehensive list of specific points in varied media, in which this trope is utilised, either intentionally or unintentionally, by the so named media. Also known as, Examples:

Please note that this was the second time the simple explanation had been used, yet the "refuting" somehow got even more complex. An explanation here.