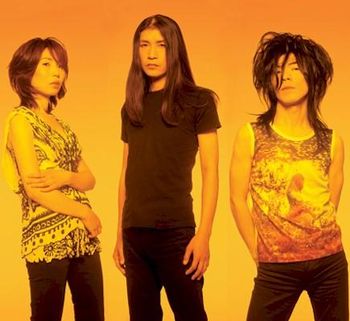 From left to right: Wata, Takeshi, and Atsuo
Advertisement:

Boris is a Japanese experimental heavy rock band. The band formed in 1992 and released their first album Absolutego in 1996. Their early sound is steeped in drone and sludge metal, styles to which they have continually returned throughout their career while incorporating other styles such as hardcore punk, noise rock and psychedelic rock.

Boris has amassed a vast catalogue of studio albums, EP's, singles, live albums, compilations and collaborations. Notable studio albums include Absolutego (1996), Flood (2000), Heavy Rocks (2002), Pink (2005), Heavy Rocks (2011) and Noise (2014). They have a confusing habit of releasing different versions of their albums depending on format and/or country of release. The 2011 Heavy Rocks is not an example of this, but actually an album of new material that is linked to 2002's Heavy Rocks by title only.

Tropes present in Boris' work include: