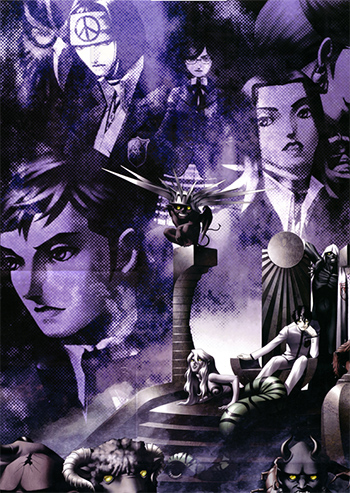 Yours is the Demon World and everything that's in it...
...A peaceful everyday life...
...A boring day after boring day
...Our days of youth slowly passes by...
What IF...
that life was shattered to pieces?
What IF...
the school was thrown into another world?
This is...
...a story of children who were stranded in the Demon World...
— Intro
Advertisement:

Shin Megami Tensei: if... was the third Gaiden Game to be spun off from the Shin Megami Tensei franchise (the first being Majin Tensei, and the second being Last Bible, which came to America as Revelations: The Demon Slayer). The title refers to two things: first is the concept of the game, which is a What If? scenario in the SMT universe, namely "what if a school was suddenly thrown into the Demon Realm?" The title and logo are also references to the arthouse British film If, where the developers seem to have gotten the school concept from (although all similarities really stop there, with one possible exception). Sadly, this game was never released outside of Japan, but Aeon Genesis released a fan translation

Mechanically, the game is built on the engine of Shin Megami Tensei II, and even recycles a large number of art and musical assets from that title. Dungeons are navigated in a first-person view; demons are negotiated with, and fused in the Cathedral of Shadows. Perhaps the biggest change mechanically is the introduction of the idea of "guardian spirits": souls of demons that will save you from death and upon entering your body, strengthen it and even give you and your compatriots magical powers.

If this sounds just a bit familiar, it should; many of the concepts introduced in if... would eventually be expanded upon in the original Persona, and the formerly anonymous main character of if... even became a character in the early Persona games, putting Persona in the same continuity as if... and the Devil Summoner games (which detail what would have happened if people knew about demons before a certain event in SMT 1, thanks to the events of if...). In other words, what started as one Gaiden Game ended up dovetailing into a huge Alternate Continuity that has eclipsed the original Shin Megami Tensei games in popularity.

The game begins with your main character (who you can choose the name and gender of, although canonically the Protagonist is a girl named Tamaki) as an Ordinary High-School Student at Karukozaka High School who is just about to go home for the day... and then, suddenly, things go very wrong. Your school doesn't seem to be on Earth anymore, demons roam the hallways, and a student named Hazama has gone missing... except he seems to be appearing to you as a kind of astral projection, taunting you. It'll be up to you and a partner of your choosing to get to the bottom of what is going on - and what Hazama may have planned for the school and the world.

The game has a cell phone prequel called Shin Megami Tensei: if... Hazama's Chapter, which details Hazama's past.

There's a one volume manga adaptation of the game released only in Japan. As with the game itself, it's been translated by fans into English.