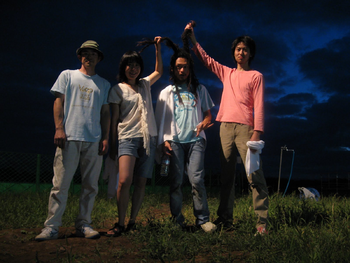 Yamantaka Eye, fresh of the heels of being banned from playing most venues around Osaka, Japan in his band Hanatarash due to their destructive nature, formed a less aggressive, but just as noisy outfit with Boredoms in 1986. Joined by drummer Yoshimi P-We, and guitarist Seiichi Yamamoto, they released the violent Soul Discharge in 1989. Rife with screams, shrieks, screeches, and even barks, Soul Discharge is still seen by some as Boredoms in their most distilled form. Soul Discharge gave Boredoms exposure in the United States, allowing them to secure a deal with Warner Music in Japan, and its corporate sibling Reprise Records in the States. From this, Boredoms released what would be their first masterpiece in Pop Tatari ("Pop Masturbation"). This album saw the band experimenting with less violent jams, as well as longer, more unformed pieces like "Cory & The Mandara Suicide Pyramid Or Gas Satori", which over the course of ten minutes sounds covers a funky downbeat, the screams of a one thousand years of angst, and then back down to an even funkier downbeat.

1994 saw Boredoms' last experiment with this kind of violent noise in Chocolate Synthesizer, a carnival of comical sound landscapes mixed in with the aggression of Soul Discharge. After 1994, Boredoms saw a drastic change in sound that would lead them to their second masterpiece, Super ae, in 1998. Psychedelic jams, Krautrock influences, with a few remnants of their noisy past elevated Boredoms to levels nobody expected. 1999 saw an evolution in this sound, where Boredoms once again raised the bar on their last album with Seiichi Yamamoto on guitar: Vision Creation Newsun. A fantastic tribal, Space Rock bonanza far and away from the beginnings of Soul Discharge's barking.

Boredoms would go on hiatus for several years before reforming as V∞redoms, with three drummers along with Yamantaka Eye. They continue to tour to this day.