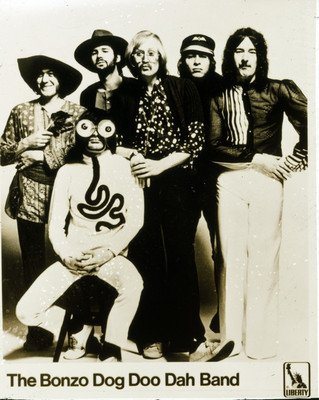 The first popular comedy rock band, in the tradition of The '40s American act Spike Jones And His City Slickers (who covered much the same sort of ground but as a sort of swing band). The Bonzos started out as The Bonzo Dog Dada Band, in reference to Dadaism. Then they became The Bonzo Dog Doo-Dah Band because they got tired of having to explain to everybody what Dadaism is. Finally they settled on The Bonzo Dog Band as they are commonly known.

The Bonzo Dog Band was basically surreal silliness and Vaudeville set to music. Their concerts were zany and people crowded more to laugh at their jokes and odd tricks than the music. Because of their silly antics and Stylistic Suck playing the band were mostly seen as a novelty act throughout their career. They are often overlooked when discussing the great bands of The '60s. Nevertheless both The Beatles and Monty Python have named them as a huge inspiration. For instance, they gained prominence thanks to a One-Scene Wonder in The Beatles' film Magical Mystery Tour. The Beatles enjoyed the group's comedy enough that they actually recorded a song In the Style of... the Bonzos called "You Know My Name (Look Up The Number)" (originally the B-Side of "Let It Be"; currently available on Past Masters and The Beatles Anthology). Paul McCartney also produced their only hit single "I'm The Urban Spaceman" (1968) under the pseudonym Apollo C. Vermouth. Because of this the Bonzos are basically seen as a One-Hit Wonder, although "Canyons Of Your Mind" also gained some notability as their Signature Song. They also performed regularly on the children's show Do Not Adjust Your Set, where Michael Palin, Eric Idle and Terry Jones were regular contributors. They later claimed the Bonzo's surreal antics were very much an inspiration to Monty Python's Flying Circus. Indeed, former Bonzo member Neil Innes regularly collaborated a songwriter for Monty Python, including Eric Idle's project The Rutles. Innes performs "How Sweet To Be An Idiot" live on Monty Python Live at Drury Lane and the band's lone hit in-between sketches during Monty Python: Live At The Hollywood Bowl.