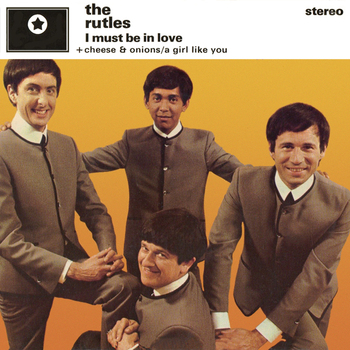 The Rutles were a Fake Band who produced real music that parodied/satirized that of The Beatles. They're the subject of The Rutles: All You Need Is Cash, a 1978 Mocku-Rockumentary that tells their story from their founding to the present. Eric Idle played an accident-prone narrator, as well as the Rutles' bassist Dirk McQuickly (although he lip-synced his performances, with the actual singing performed by Ollie Halsall, who died in 1992). The rest of the "Pre-Fab Four" were rhythm guitarist Ron Nasty, performed by Neil Innes; lead guitarist Stig O'Hara, performed by erstwhile Beach Boys member Ricky Fataar; and drummer Barry Wom, performed by John Halsey.

The ersatz group first appeared in a 1975 sketch on Idle's post-Python BBC2 sketch show Rutland Weekend Television, a program that ranged from Funny Moments to So Okay, It's Average. One of the show's strengths was its musical numbers, most of which were written by Innes, perviously a core member of The Bonzo Dog Doo-Dah Band and an occasional supporting act with Monty Python. In the sketch, the Rutles were born from a psychiatric patient who was sick with love songs (It Makes Sense in Context — sort of). Neil Innes played the patient, singing "I Must Be in Love," which directly segued into a parody of A Hard Day's Night combined with the Beatles' debut appearance on The Ed Sullivan Show. Because RWT was the source of the band's name, the u is short — "Rut-les."

When Eric Idle guest-hosted Saturday Night Live a year later, he brought over two RWT segments to air as shorts: "Pommy", a parody of Tommy, in which the hero tries to escape from a Ken Russell film, and the Rutles. Idle was especially proud of Pommy, but naturally Lorne Michaels chose the Rutles; SNL was in the midst of publicly "wooing" the Beatles to reunite on the show. The short proved to be a wild success, with many viewers calling in to ask about the Rutles (some of them even believing they were actually the Beatles incognito). After Idle returned to England, he began writing a feature-length Mockumentary for the BBC, but when Michaels offered him a larger budget with NBC, he committed to doing it with them.note Idle was fed up with shoestring budgets. RWT wasn't given the funding for a BBC light entertainment (comedy/sketch) show, but that for a chat (talk) show, which meant that they had to make props and do shoots for the money it takes to tape talking heads. Not fun.

The Rutles: All You Need Is Cash was perhaps the first SNL spinoff to be made, but because of its initial failure and the nature of its rehabilitation, they aren't consistently linked. When it originally aired on NBC, it was the lowest-rated program on that night. (Apparently, it aired just before the revival of Beatlemania.) It has since been Vindicated by History and Vindicated by Cable. It is also important because it was one of the few films about the Beatles (more or less) to be made before John Lennon was killed and got the Posthumous Popularity Potential effect.

The story that The Rutles tells parallels the history of The Beatles closely, if inexactly. There are side-stories about how The Rutles affected the wider world, which is, in fact, more than anyone, including the narrator, will admit.

There was a Contested Sequel in 2002, Can't Buy Me Lunch. It was made with outtakes from the first film, with some new footage with Eric Idle's Narrator and a host of new interviewees tying them together. There were also albums; besides the soundtrack to the first film, there was Archaeology in 1996, timed to compete with the Beatles' Anthology (and made without Idle's involvement; Halsall's vocals were featured on two tracks created from 1978 rehearsals, making them the last Rutles songs released with his involvement). It did surprisingly well, considering the competition.

In 2010, a fan released the Rutles' equivalent of the Beatles' Love, entitled Lunch. It can be streamed at the official site for the project

Unfortunately, Innes passed away on December 29, 2019, all but ending the hope of any additional new Rutles material.

Since Wikipedia has sporadically been removing and re-adding the lists of tracks parodied by each individual Rutles track, both albums' track lists are reproduced here with said notes:

Example of:
Borrowing the Beatles