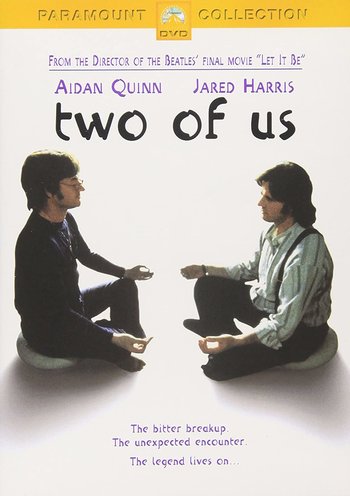 A 2000 TV Movie depicting a fictionalised version of an afternoon and evening that John Lennon (Jared Harris) spent with Paul McCartney (Aidan Quinn) in New York City in 1976. This was the occasion when they happened to be watching Saturday Night Live, on the night that Lorne Michaels offered The Beatles $6000 if they'd play three songs on the show: this incident is dramatised in the movie, and forms part of its dramatic climax.

It was written by Beatles fan Mark Stanfield and directed by Michael Lindsay-Hogg, who'd directed Let It Be and therefore had some first-hand knowledge of his subject matter. Thanks to a surprisingly well-informed and sensitive script, and some fine performances from the two leads—the whole film is practically a two-hander between John and Paul—it's one of the better fictional depictions of the Beatles. Most reviewers agreed that what could have been a terrible exercise in bad accents and celebrity impersonation was in fact a sympathetic and well-crafted piece of drama.