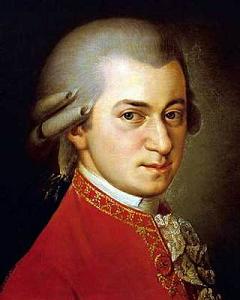 Wolfgang Amadeus Mozart (January 27, 1756 — December 5, 1791) was a composer of Classical Music, whose works are considered the pinnacle of the era. Along with Johann Sebastian Bach, Beethoven, Johannes Brahms and Richard Wagner, he is probably one of the best known and most influential composers of classical music. Birth Name: Johannes Chrysostomus Wolfgangus Theophilus Mozart.note 'Amadeus' is Latin and 'Theophilus' is Greek for Gottlieb, 'beloved of God'.

Mozart's talent became evident at an early age, and he was on the road as a touring musician by the age of six. On October 13, 1762, he met Marie Antoinette while performing for her family. There was a long-standing rumor that after he tripped and she helped him up, he fell in love with her and begged her to marry him even though they were only children. He spent time living and composing in various European cities, always seeking patronage but not always finding it, and generally spending more money than he actually had (which is saying something, because he actually made a fair amount). He died at the young age of 35, survived by his wife Constanze and two children. Basically, anything Michael Jackson did, Mozart did first, up to and including the Manchild bit.

Mozart's works are known for their perfection of form and clarity, although they could also be quite fiery and emotional at times. In the public mind, his Eine Kleine Nachtmusik

IS classical music, as measured in "number of people who have it as their ringtone." Allegedly, Mozart was once able to smuggle state secrets out of the Vatican, in the form of Gregorio Allegri's Miserere (Psalm 51)

which, at the time, was by order of the Pope not performed anywhere except the Sistine Chapel. ...Until Mozart heard it, carried it out in his head, and transcribed it almost perfectly from memory. Finally, he is famed for his operas, including The Magic Flute, which is frequently referred to in other texts, including an inevitable parody on The Simpsons.

You may be surprised to learn that he was actually very fond of Toilet Humor, and even wrote a canon titled "Leck mich im Arsch", which translates as "Lick me in the arse" (or, perhaps more idiomatically, "kiss my arse"). Supposedly, he was also still playing with toy soldiers well into his thirties (mind you, this was long before tabletop War Gaming was a thing)note  although it was commonly used by actual battle tacticians and he died at 35 from an illness. During those years he composed well over six hundred separate pieces. note The first "definitive" catalogue of Mozart's work, compiled by Ludwig von Köchel, put the exact number at 626. Since then, new works have been found while some works in Köchel's catalogue have been re-attributed to other composers. Moreover, as a non-negligible fraction of Mozart's work was lost before it could be published, the exact number will likely forever be a mystery.

Mozart's last days were fictionalised in the Peter Shaffer play and 1984 film Amadeus. It is worth noting, however, that due to a mix of Artistic License and Rule of Drama Amadeus is very much not an accurate portrayal of the composer's life. In particular, many object to the depiction of his "rivalry" with Antonio Salieri, which in reality was more of a guarded but respectful co-existence; Mozart privately resented the fact that, because in those days it was cool for musicians to be Italian, Salieri, being Italian, got more respect from the court than he himself did, but the two men seem to have been on reasonably friendly terms, and there's no evidence to support the idea that Salieri was violently jealous of Mozart's talent.note According to some accounts, Salieri was one of the few mourners present at Mozart's burial. He also collaborated with Mozart on some of his compositions and was a mentor to Mozart's second son. The story of the rivalry was made up wholesale by Alexander Pushkin in his 1830 play Mozart i Salyeri—written just 5 years after the death of Salieri. For what it's worth, the movie did get a few things completely right: by all accounts, Mozart's laugh was supposed to be just as annoying as it was on screen, and (again) he was just as much of a boorish man-child as portrayed in the film. Adding to the mystique is the fact that Mozart was composing a Requiem funeral mass

at the time of his death, with some legends claiming that he passed away while attempting to scribble down the 9th measure of the Lacrimosa

(0:53 in this recording). Constanze chose a student of his, Franz Xaver Sussmayr [sic], to step in and finish what Mozart started, and people are still arguing over how much of the work is Mozart's, Sussmayr's or a third party's, and whether Mozart would have agreed with the completed work. A few ambitious composers have even provided their own completions. Sussmayr's is by far the most famous, though, due to the simple expedient of having got there first. (It's his version you've heard movements of in movies, as it provides several Standard Snippets and much of the Ominous Latin Chanting in the Public Domain Soundtrack catalogue, the most famous being the "Dies Irae

His life is also covered in the Kunze/Levay German-language musical Mozart!. Like Amadeus, it's by no means accurate.

Mozart is one of the cultural bones of contention between Austrians and Germans, each regarding him as one of their own. Mozart was born in Salzburg, which is now part of Austria, but then was a state of its own in the Holy Roman Empire. The Mozart family is from Swabia, Mozart's father specifically from Augsburg (now in Bavaria) and he ensured that his son held citizenship of that Free City. Wolfgang Amadeus Mozart mostly worked in Salzburg and Vienna, but also in other cities such as Mannheim and Munich, and toured all over Europe. Apparently, he particularly liked Prague, as the audience there was the most enthusiastic about his operas. Mozart considered himself German and was evidently proud of his German fatherland

Being one of the best-known composers of Classical Music, Mozart gets gets referenced a lot in all kinds of media. Odds are pretty good if a famous classical composer needs to make an appearance, it will either be him or Ludwig van Beethoven.

Works of Mozart on this wiki include: