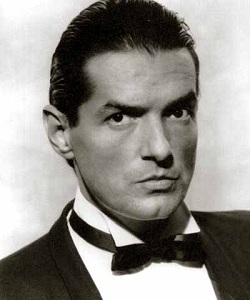 The other Austrian superstar of The '80s.

New Wave singer Johann "Falco" Hölzel (19 February 1957 – 6 February 1998) became a One and a Half Hit Wonder with "Der Kommisar" (After The Fire's English-language cover was more popular), followed by the worldwide hit "Rock Me Amadeus." - in the US at least, for, while he was more consistently popular in German-speaking countries, follow-up songs (e.g. "Vienna Calling") were, at best, modest hits in the US.

Along with Nena's "99 Luftballons," he introduced (mostly) German-language songs to an English-speaking audience; the difference was that Nena sang, while Falco rapped. He passed away in 1998 at the age of just forty after his SUV was in a serious collision with a bus on a mountain road in the Dominican Republic.

This ain't that Falco.