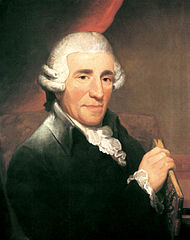 Franz Joseph Haydn (31 March 1732 – 31 May 1809) was an Austrian composer and a pioneering figure in Classical Music. Haydn's parents noticed his talent at a young age, and sent him to live with a relative in Hainburg, where he could receive a good musical education. He was picked to be a boy soprano in Vienna's Cathedral of St. Steven. He worked there for a few years, and was promptly fired when his voice broke. Haydn freelanced for the next few years, getting attention in local orchestras. He finally earned a long term position at the court of Prince Paul Esterházy (and later for his brother and successor Nikolaus). Prince Esterházy's court spent half of every year in the countryside, which isolated Haydn from the musical mainstream for thirty years. This forced him to be very creative. He essentially invented the symphony and the string quartet. Even Mozart noted Haydn as a profound influence on his work.

He also composed "Gott erhalte Franz den Kaiser", a patriotic song about the then-Emperor of Austria Francis II Habsburg. Its melody was later used for the "Deutschlandlied", the present anthem of Germany.

His life and works provide examples of: