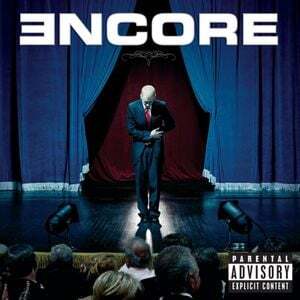 Alright now I, I just flubbed a line. I was going to say something extremely important, but I forgot who, or what, it was.
Here we go now, do-si-do now, curtains up, the show must go now
Ring-around-the-rosie, the show's over, you can all go home now
But the curtain just don't close for me, this ain't how fame was supposed to be
Where's the switch I could just turn off-and-on? This ain't what I chose to be
So please, God, give me the strength to have what it takes to carry on
'Til I pass 50 back the baton, the camera's on, my soul is gone!
— "Evil Deeds"
Advertisement:

Encore is the fifth studio album by Eminem, released on November 12, 2004. The album is a sequel to The Eminem Show, featuring similar lyrical themes about Eminem's fame and chaotic personal life, the political situation, and Horrible Hollywood, but expanding the remit to cover Eminem's new life as the mogul of Shady Records, the fallout of his beefs, his regrets over the misery he caused, and provide a swan-song for Slim Shady — who is killed off at the end of the album. With a somewhat Troubled Production plagued by leaks and Eminem's drug addiction, and getting mixed reviews, it is considered to be the album that ended Eminem's golden age, to the extent that Eminem himself apologised for the album in 2010's Recovery. Nevertheless, it has a cult following for its lunatic, freestyled rapping, nihilistic and giddy Black Comedy, and stirring ballads and chestbeaters that — most shocking of all — introduced a mature Eminem to audiences for the first time, prefiguring 2010's Recovery.

In 2003, a CD Eminem had burned for his brother Nathan, with tracks for the album that would later become Encore, was stolen and turned into a bootleg mixtape, forcing Eminem to scrap the original tracklist (which had been mostly Diss Tracks aimed at his foe Benzino). Getting it into his head that he needed to recapture the spontaneity of his The Slim Shady LP days, Eminem holed up in a studio in Orlando with Dr. Dre, and recorded a large number of songs written mostly by freestyling (rather than his typical method of working them out on paper).

While Dr. Dre and Mike Elizondo (Dre's session bassist) remember the Encore recording session as a positive experience, describing a motivated and playful Eminem flexing his songwriting genius, Eminem's memories of the recording session are darker. After coming off probation for his 2000 assault charge in 2003, Eminem — no longer subject to random drugs testing — developed an addiction to Ambien. Depressed and trying to hide the extent of it from his friends and family, he wrote most of Encore while gobbling handfuls of pills, and his flow on the album is slurred, disjointed and dissociated, with unintuitive meters and tortured Painful Rhymes.

Since 2002, hip-hop had changed. The dominant styles were hooky snap and crunk from the South, Commercial Gangsta Rap starring Eminem's own protégé 50 Cent, and the new critical darling of Kanye West, whose everyman persona and soulful production could not have been further from Eminem's psycho-brat persona and plastic-classical sound. The material on Encore is influenced by the new trends — looking to Ye when chipmunking kitchy-pop samples in "Like Toy Soldiers", looking to snap with repeating lines and swaggering hooks, telling gangland tales in "One Shot 2 Shot", and — most significantly — affecting a crunkish Southern accent. While Eminem had dabbled in accents in The Eminem Show's "Square Dance" and "Superman", by Encore Em was firmly in his "accent phase"; he would continue to explore the creative possibilities of stupid accents in the next few years, culminating in 2009's Relapse.

Just as Eminem's mainstreaming by the success of 8 Mile was leading to inevitable Hype Backlash, his beef with his self-declared archnemesis Benzino damaged his reputation. Trying to smear Eminem as a closet racist, Benzino had used his magazine The Source to spread recordings of a teenage Eminem performing two racist songs. While The Source would fire Benzino and Eminem would be credited with ending his career, the negative publicity caught Eminem in the wrong kind of controversy — Encore's lead single "Just Lose It" contained swipes at Michael Jackson for his child molestation charges, which in the context of the racist songs was interpreted by many prominent Black musicians and commentators as a racist swipe against the world's most successful Black musician. The song being a formulaic remake of "Without Me" and "The Real Slim Shady" didn't help much. The second single for the album, "Mosh", a Protest Song calling for his fans to unseat George Bush in the election, got a much more positive response from fans and critics, though was released after the voter registration deadline. (Eminem had wanted "Mosh" to be the lead single, which would have prevented this problem, but had been forced to record and release "Just Lose It" due to Executive Meddling.)

Encore is known for its Cerebus Rollercoaster content. The midsection of the album is Piss-Take Rap. Slim raps more like a cartoon ever before, repeating himself, rewinding the tape, forgetting his lyrics, clucking like a chicken, morphing into a gay homophobic pastor or escaping censure by becoming a German hand puppet, antagonising his haters with sadistic stage hypnotism, yelling in the voice of Pee-Wee Herman, getting death threats from Christopher Reeve, and vomiting at the thought of his ex-wife (who had gone on the lam from a cocaine charge). Skits have Eminem playing with an electrolarynx and literally recording the sound of him taking a shit (Eminem considered this to be the "funniest, most fucked up" thing he ever did). But on either sides of the silly bit of Encore, the 31-year-old Eminem displays growing maturity — apologising for the racist songs in "Yellow Brick Road", telling the story of his past poverty to his daughter in "Mockingbird", and delivering the showstopper power ballad "Like Toy Soldiers" about walking away from his beefs. Wilder still, the album contains love songs, arguably the most shocking thing on the album to 2004 audiences who considered him an arch-misogynist. And Eminem, who had done intensive vocal coaching with Roger Love in 2003, experiments with singing entire songs for the first time, as well as trialling slurry melodic flows that prefigure "mumble rap" by nearly a decade.

Encore had the biggest selling debut in hip-hop history, but has had a complicated legacy. Fans commonly regard it as one of Eminem's worst, and Eminem is still apologising for it. However, Danny Brown cites it as his favourite Eminem album and a major influence on his style, particularly the song "Rain Man". Other surprising fans of Encore include The Rolling Stones' drummer Charlie Watts, Rosie O'Donnell, who was influenced by "Evil Deeds" in her book Celebrity Detox, and Eminem's old nemesis Moby, who was willing to set his differences aside to praise "Mosh". Eminem's virtuosic and perfectionistic later work has also led to Encore gaining retroactive praise for its spontaneity and humour — Slim would not be heard going off-the-top on an album again until 2018's Kamikaze, and he wouldn't be this goofy again until 2020's "Key (Skit)".

I Done Troped On Everythin' But Little Boys!: