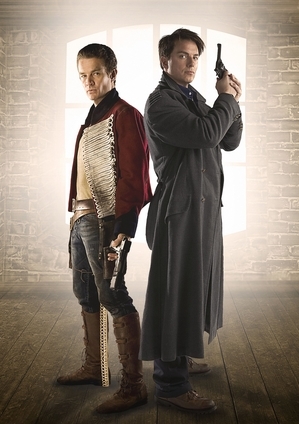 Authors want their characters to stand out, and there's various tropes that can be used to make their look distinctive. One such way that says a lot about a character's... well, character... is for them to purposely use an Outdated Outfit in everyday life. Rather than a suit and tie, they'll wear finery from London in the 1850s. Instead of a dress, how about a ceremonial Kimono? Instead of business attire, go to meetings decked out in pompous regal clothing from the Renaissance. Regional chic from past times works as well: a character wearing 1800s cowboy gear is sure to look cool and stand out. Values Dissonance will often determine how this trope applies: berets are pretty cool in North America, but in France and Spain they are more often thought of as old-fashioned.

This isn't just a distinct visual look, but a subtle (or very overt) statement that this character is enamored with the bygone style and perhaps even time period. They have a different world view than most contemporary people (though not necessarily the one from their chosen period of dress) and aren't afraid to defy convention by dressing unconventionally. When done well, this trope shows it's not the clothes that make the man or woman, but the wearer who gives what ought to be a desperately out of place Halloween costume a natural style and appropriateness. Somehow, it seems natural that the man in a cowboy suit is opening a bank account, and the woman in the Kimono is working at a particle physics lab, or the man in a bowler hat is slaying zombies.

Often the cause is a character is Really 700 Years Old, and doesn't care to keep up with the changing fashions.

A Sister Trope to Disco Dan (a character's whole personality is stuck in a bygone era) and Fan of the Past. Sub-Trope of Anachronism Stew.