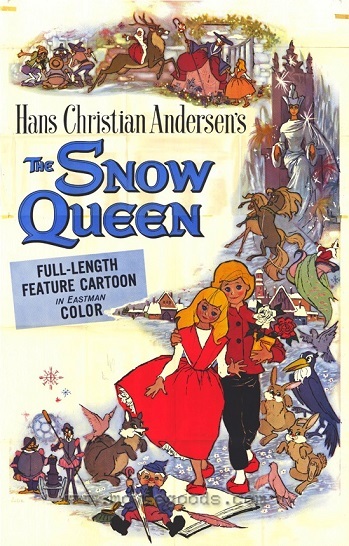 The Snow Queen is a 1957 Soviet Animated Adaptation of The Snow Queen, produced by Soyuzmultfilm. An English-dubbed version, featuring the voices of Sandra Dee and Tommy Kirk, was released in the U.S. in 1959. It was dubbed again in 1985 and again in 1995. The film is now in the public domain and can be legally viewed here

, with a higher quality version available on the streaming platform Darkroom.

The story begins with Gerda's (Dee) grandmother telling her and Kai (Kirk) the legend of the Snow Queen. When the children make fun of her, she tells the splinters of her shattered mirror to go into the eyes and hearts of those who have offended her. Kai grows cold and distant from Gerda, and the Queen takes him away... and Gerda goes out to rescue him.

Hayao Miyazaki named The Snow Queen as one of his favorite films and one of his biggest influences to keep him in the animation industry.

The Snow Queen provides examples of the following tropes: