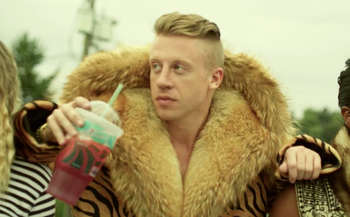 After finishing a bachelor's degree, he decided to pursue his musical interests and took a job at a juvenile detention facility, where he was involved in a project called "Gateways", engaging troubled youth through rap. In 2000 he released the EP Open Your Eyes under the moniker "Professor Macklemore". Five years later he shortened the name to the current Macklemore and his full-length debut,The Language of My World, was released.

In 2012, he and producer Ryan Lewis released his first studio album, The Heist, which, despite going under the radar upon release, became a critical and overnight success after the runaway success of its fifth and final single "Thrift Shop". His songs "Thrift Shop" and "Can't Hold Us" both peaked at number one on the Billboard Hot 100, The former even won the Triple J Hottest 100 for that year, and his album peaked at number two on the Billboard 200, although neither were promoted or advertised on any mainstream media. In 2014, Macklmore won four Grammys, including Best New Artist, Best Rap Album (The Heist), Best Rap Song and Best Rap Performance ("Thrift Shop").

Macklemore and Ryan Lewis are also on their own independent music label. In August 2019, Macklemore and his wife became minority owners of Seattle Sounders FC in Major League Soccer.

This artist displays examples of: