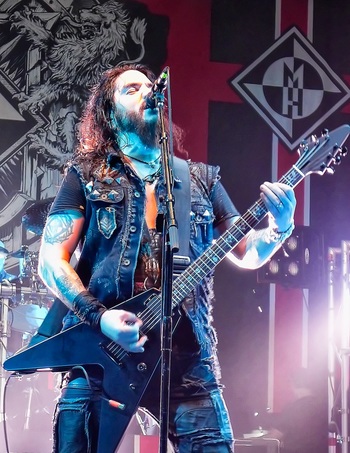 Robb Flynn, lead singer and guitarist (and only remaining original member).
Machine Head is an American Heavy Metal band formed in Oakland, California in 1992 by vocalist/guitarist Robert Flynn, who had departed from the Thrash Metal band Vio-lence due to actual violence between Flynn and the rest of the band, and gang members. Flynn cofounded Machine Head, named for the Deep Purple album, Machine Head with bassist Adam Duce, and the new band started off playing a fusion of Groove Metal and Thrash Metal.
Advertisement:

With the release of the band's third album, 1999's The Burning Red, Nu Metal elements were also added, including semi-rapped vocals and guitar licks that imitated turntable scratching. The band's fans accused Machine Head of "selling out"; but Machine Head countered that they weren't trying to sound like other bands, just that they wanted to sound different.

After guitarist Ahrue Luster (responsible for the band's Nu Metal influence) left the band due to creative differences, Machine Head initially decided to begin writing as a three-piece band, but temporary guitarist Phil Demmel (formerly of Vio-lence) became a permanent member of the band. The band's style has since evolved into a fusion of melodic elements with groove and thrash now dominating the band's style again.

On 22 February 2013, long-time bassist Adam Duce was fired from the band. His departure makes Rob Flynn the sole remaining original member of the band. He was replaced by former Sanctity frontman Jared MacEachern.

Machine Head's eighth studio album,Bloodstone & Diamonds, was released on November 7th 2014 to critical acclaim and debuted at #21 on the Billboard charts, the band's highest chart position to date. It was also their first album not to be on Roadrunner Records, instead being on Nuclear Blast which they are currently signed to as of now.

The band's ninth studio album, Catharsis, was released on January 26th, 2018. In late 2018, Machine Head embarked on a "farewell tour" of their current lineup. Following the tour, longtime members Phil Demmel and Dave McClain parted ways with the band. The band initially announced a Burn My Eyes 25th anniversary tour with Logan Mader and Chris Kontos returning on a live basis, but held off on announcing the entire new lineup; news of an upcoming single titled "Do or Die" with Carlos Cruz on guest drums was dropped sometime after. On September 27, 2019, the new lineup was announced: Waclaw "Vogg" Kieltyka would be taking Demmel's spot, while Matt Alston (Devilment) took McClain's spot.