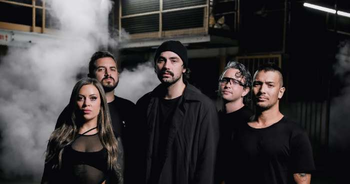 Make Them Suffer is an Australian Deathcore band that features elements of Symphonic Metal, Progressive Metal, and regular Metalcore. In fact, some regard them as the line between deathcore and metalcore. They formed in 2008, but didn't become a major player until the '10s where they were signed to Rise Records. While they're not an outright massive name in deathcore, they've gained an increasingly large worldwide following over the years. 2016 marked their very first headlining U.S. tour.

Also, they are not named after the Cannibal Corpse song of the same name. It was just something they made up on the spot.

After going through several lineup changes, the roster came to be as follows: