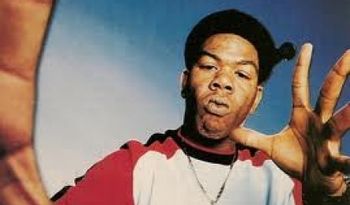 "Ya won't be around next year, my rhyme's too severe, kickin' mad flava in ya ear.."
Advertisement:

One-hit wonders come a dime a dozen in any genre.

His early life and career, believe it or not, shares some similarities with Tupac Shakur's: Both were born in New York, and got their starts as roadies in popular hip hop groups EPMD and Digital Underground, respectively. But unlike Tupac, Mack didn't start releasing material until after his group disbanded.

After a disastrous first attempt under the name "MC EZ" in 1988, Mack signed to Sean "Puffy" Combs' Bad Boy Records in 1993 using his real name. A year later, as a lead up to his debut album Project: Funk Da World, Mack released his breakthrough single "Flava In Ya Ear." A track he almost didn't record

due to disagreements over the song's Easy Mo Bee-produced instrumental.

Despite his own reservations, "Flava In Ya Ear" would be his most acclaimed and highest selling single he ever released; going Platinum, earning a Grammy nomination, and cracking the Billboard Pop Top Ten. A remix with an all-star line up of rappers was quickly made to capitalize on the song's success. It was also the beginning of the end for Craig Mack.

The very first artist featured on the remix was not Mack himself, but labelmate The Notorious B.I.G., who was no stranger to appearing on remixes at this point. Big and Mack did not like each other at all (Big himself even said he only appeared on the remix to appease Puffy), and used their verses to throw subliminal shots at each other. But Big's appearance on the remix overshadowed Mack completely.

The rest of 1994 continued to slide downhill for Mack. Project: Funk Da World, despite getting certified Gold, and getting good reviews, was overshadowed once again by the Notorious One's album Ready to Die, which was eventually certified quadruple-Platinum. Compounding this was the relative failure of his second single "Get Down", which stalled at No. 38 on the pop charts and was certified Gold.

The nail in the Bad Boy coffin would come just a few months after his Grammy nod. Mack appeared on ''Yo! MTV Raps!'' with Biggie and Puffy

, with the latter announcing a new album for Mack to be released January of 1995, much to Mack's visible confusion. Not only did that album never materialize, Mack was booted from Bad Boy for low album sales. Mack would attempt a comeback with his second LP Operation: Get Down in 1997, but the album failed to match his Bad Boy success.

Since then, outside of a random mixtape release

, and some rather bizarre

rumors, Craig Mack remained off the hip hop map for almost two decades. As if that wasn't harsh enough, he recently passed away from heart failure on March 12, 2018.