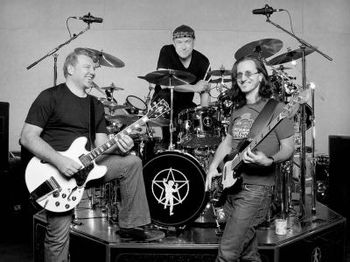 Rush in their final years. From left to right: Alex Lifeson, Neil Peart and Geddy Lee.
Influenced by:
All the world's indeed a stage
And we are merely players
Performers and portrayers
Each another's audience outside the gilded cage
— "Limelight", Moving Pictures, citing William Shakespeare's As You Like It
Advertisement:

Rush were a Canadian rock trio formed in 1968, although, listening to some of their songs, you'd never guess there were only three of them. They were probably best known for Geddy Lee's "wait, is that a guy?" vocals and prominent bass and Neil Peart's early Ayn Rand-inspired lyrics (though he had distanced himself from her after some backlash, and it's really only the albums from Fly by Night through about Hemispheres where her influence is particularly apparent). While the band had always been an album rock (and later classic rock) radio favourite, Rush saw a decent boost to their popularity for their contributions to the video game series Rock Band - and another, unfortunately enough, following Peart's passing.

One of those bands that split people down the middle - a lot of people hate Progressive Rock in general, and many disapproved of Peart's early fondness for Ayn Rand. (To be fair, while Peart acknowledged he still had areas of agreement with Rand, he did not agree with her whole philosophy, and he removed her "thank you" credit from 2112* as of at least the original compact disc issue.) They are probably the biggest Cult Classic band in the world: they have sold tens of millions of records throughout their career, but although a lot of people that like them really like them, the same goes for people that dislike them.

Although most commonly associated with Hard Rock and Progressive Rock, their style varied considerably during their career. Originating with a fairly straightforward Hard Rock sound heavily influenced by Deep Purple and Led Zeppelin; they remained such for their first few albums, similarly incorporating fantasy and science-fiction themes into their lyrics, and elaborate arrangements into their instrumentals. They were increasingly influenced by the growing Progressive Rock movement but maintained a harder-edged sound than most of their contemporaries, and it was at this point that Peart's infatuation with the writings of Ayn Rand became prominent. They soon began to incorporate Jazz, New Wave, Pop, and Reggae influences; and transitioned to a predominantly Synth Rock style that lasted well through The '80s, a sound heavily influenced by Talking Heads and The Police. In the '90s with the release of Counterparts, the band yet again changed their stylings to stay relevant, now taking elements from Alternative Rock and even Grunge and while maintaining some of the Progressive sound; they began moving back into their earlier Hard Rock style, including the release of an EP of covers of songs by their earliest Hard Rock influences like The Who, The Yardbirds, and Cream.

The group's line-up remained consistent since Peart joined in 1974 to replace founding drummer John Rutsey, making them the third-longest enduring band in rock music (only ZZ Top and Golden Earring have been together longer) by the time of their retirement. Once Peart joined the band, he became the primary lyricist, while Lee and Lifeson concentrated on the music. Before that point, Lee and Lifeson did all the songwriting; Rutsey had written some lyrics for their eponymous 1974 debut album, but never gave them to the others.

Both Lee and Lifeson split off in favour of solo efforts during the band's tenure (My Favourite Headache and Victor, respectively). Lifeson reportedly had a sequel album in the works, Victor II, but abandoned the idea in light of Peart's personal tragedies. (Peart's daughter Selena was killed in a car wreck, and his common-law wife Jackie died of cancer ten months later; Peart recounts, "They said it was cancer, but of course it was a broken heart.") Lee recorded My Favourite Headache during the band's hiatus.

Shortly after the release of their debut album, Rutsey, a diabetic since childhood, left due to health problems and was replaced by Peart. Rutsey passed away in the summer of 2008. Lee replaced original bassist/vocalist Jeff Jones shortly after the band formed in 1968.

In 2015, the band announced that their R40 Tour, which concluded on August 1 of that year, would be their last large-scale tour due to health issues for Lifeson (arthritis) and Peart (tendinitis). However, they left open the possibility of smaller tours and future studio projects. In January 2018 however, Lifeson confirmed in an interview that Rush was done, and they had no plans to record a new album or tour anymore. Neil Peart's death from brain cancer two years later made it clear that the band was over for good. Lee and Lifeson have since said they may eventually record together again, but will not tour, or release any such material under the name Rush.

In 2022, Stern created a pinball machine based on the band's work, with the surviving members of the group participating in its creation and providing voice work especially for it.

Not to be confused, if such a thing were even possible, with Rush Limbaugh, who you may also hear on the radio. (Note: As of March 2012, this Rush has submitted a cease-and-desist order

for a wonderful Hurricane of Puns and count all the Rush song titles and lyric references you can find.) Also not to be confused with the Formula One biopic by Ron Howard or a flying robot dog.

See also Freewill in 2112, a musical based on the album.

"We are the priests of the Tropes of Syrinx":

"For the tropes of the prophets were written on the studio walls":