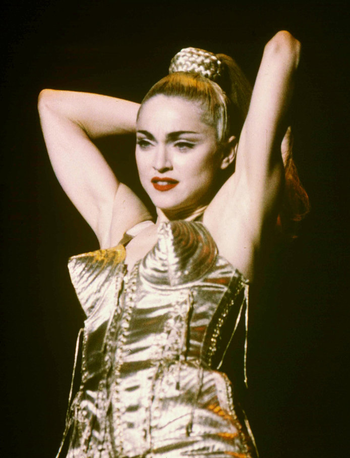 Madonna Louise Ciccone (born August 16, 1958) is an American recording artist, actor and entrepreneur. Born in Bay City, Michigan, and raised in Rochester Hills, Michigan, she moved to New York City in 1977, for a career in modern dance. After performing as a member of the pop musical groups Breakfast Club and Emmy, she released her self-titled debut album in 1983 on Sire Records, a division of Warner (Bros.) Records. The album was a hit, as well as a few of its singles, and with it Madonna started her rise to fame.

With her second album, Like a Virgin (1984), Madonna rocketed to super-stardom. The album spawned a slew of hit singles (especially the titular single), and a live performance by the singer at the very first MTV Music Video Awards sealed the deal towards Madonna's ascension to super-stardom. Madonna's relationship with MTV further made her a household name; alongside Michael Jackson and Prince, she became one of the defining artists of the 80s as her videos and sexually charged, often ironic and catching lyrics made her an icon of the era.

By this time, Madonna landed a supporting cast role in Desperately Seeking Susan (1985), playing the title character Susan. The film was a commercial and critical hit and was the first of many movie roles for Madonna. Unfortunately, her follow-up films Shanghai Surprise (1986, with then-husband Sean Penn) and Who's That Girl (1987) didn't fare as well.

Her third album, 1986's True Blue, saw the first of many re-inventions for Madonna, as she shed her "mall rat" persona and adopted a more sophisticated "sex kitten" image. The album also contained "Live To Tell," one of the most important songs Madonna ever put out. The ballad won critics (many of whom had dismissed Madonna as a teenybopper act) over and breathed new life to her career. Additionally, the single "Papa Don't Preach," about an impregnated teenage girl who wants to keep her baby, caused some controversy.

Expanding on the use of religious imagery with Like a Prayer (1989), Madonna received positive critical reception for her diverse musical productions, while at the same time receiving criticism from religious conservatives and the Vatican. The video for the title track gained massive controversy, costing Madonna a hefty contract with Pepsi for use of the song in its commercials. Madonna's marriage to Sean Penn also collapsed under accusations of spousal abuse, which Madonna addressed (for the first and only time) in the song "Till Death Do Us Part."

Madonna made her Broadway debut in 1988 in David Mamet's Speed-the-Plow, but her acting career took off again in 1990's Dick Tracy, which also spawned one of her biggest hits, the song "Vogue." As the 1990s began, Madonna founded the Maverick corporation (the name is a portmanteau of "Madonna" and "Veronica," her confirmation name), a joint venture between herself and Time Warner, and released The Immaculate Collection, a "best of" album that featured the controversial single "Justify My Love." The video for the song was banned on MTV, kicking up more controversy as Madonna entered into her "Sex" period.

1992 saw the joint release of the studio album Erotica and the coffee-table book Sex. This, plus the 1993 critical flop Body of Evidence (which had Madonna playing a black widow nymphomaniac who used sex to kill men), created a firestorm of controversy regarding the artist.

1994 saw the release of Bedtime Stories; besides featuring a collaboration between Madonna and Björk (the album's title track) and the commercially successful video/song "Take a Bow," the album was released as Madonna landed the lead role in the 1996 film version of the musical Evita. Winning the Golden Globe Award for Best Actress in a Musical or Comedy, the film was a turning point as Madonna began the transition towards a more respectable mother image, which was enhanced with the birth of her firstborn child.

Madonna's seventh studio album Ray of Light (1998) became her big comeback album, as it was one of her most critically acclaimed and commercially successful albums. The album mixed dance music with introspective lyrics about motherhood and religion, as Madonna became involved in Kabbalah. With Music (2000), Madonna returned to dance music full-time, the album also introduced Sacha Baron Cohen, whose Ali G character was featured in the video for the title track, to American culture. Sadly, Madonna's decision to try her hand at rap and political commentary caused her 2003 album American Life to flop. However, she rebounded with Confessions on a Dance Floor (2005), a hugely successful album.

Departing from Sire/Warner, Madonna signed an unprecedented $120 million dollar contract with Live Nation in 2008. Her eleventh album Hard Candy was released the same year; it received a pretty mixed reaction from hardcore fans and casual listeners alike for its hip-hop / R&B sound because many thought she was trying to pander to listeners of urban music. In any event, it did feature some interesting collaborations with Justin Timberlake, Kanye West, Pharrell Williams, and Timbaland.

2012 saw the release of her twelfth studio album MDNA, launched by a single featuring Nicki Minaj and M.I.A., and not to mention a major Super Bowl halftime performance as well. It was a return to her dance-pop sound. However, it wasn't the comeback people were expecting. Many fans blame it on poor choices for lead singles and lack of promotion from Madonna. In December 2014, 30 songs from the recording sessions of Madonna's upcoming 13th album were leaked, even before Madonna even properly announced the album. Due to this, Madonna announced that her 13th album, entitled Rebel Heart, would be released on March 10, 2015. Her latest album, Madame X, was released on June 14, 2019.

Madonna is ranked by the Recording Industry Association of America as the best-selling female rock artist of the 20th century and the second top-selling female artist in the U.S., with 63 million RIAA-certified albums; she has sold over 200 million albums worldwide. In 2007, Guinness World Records listed her as the world's most successful female recording artist of all time, and she was inducted into the Rock and Roll Hall of Fame (2008). Considered to be one of the most influential women in contemporary music, Madonna has been known for continually reinventing both her music and image and for retaining a standard of autonomy within the recording industry; she is recognized as an influence among numerous music artists.