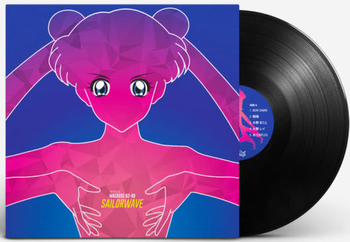 Future Funk (also known as New Disco, not to be confused with nu-disco

) is a sub-genre of Vaporwave born during the middle of The New '10s; along with Vaportrap and Simpsonwave, it is one of the most well-known and popular subgenres of the movement, and like its sister and mother genres, was born and remains primarily active on The Internet. It can be best described as "vaporwave that can be danced to".

While Future Funk shares Vaporwave's central structure of using modified and extended samples from popular music, it is more strongly rooted in synth-funk and Alternative Dance than in electronica. Future Funk is also typically much Lighter and Softer than Vaporwave, carrying a more fast-moving and upbeat tone compared to its mother genre's more melancholic and sarcastic direction. This is most strongly exemplified by the fact that unlike Vaporwave, which focuses on sampling synthpop and pop rock, most of the samples used in Future Funk are taken from City Pop, a typically upbeat genre of Japanese Pop Music popular during The '80s. Like the western pop typically used in Vaporwave, the general tone and aesthetic of City Pop was heavily rooted in the economic upturn Japan experienced during the 1980's, particularly the 1986-1991 financial boom. However, while Vaporwave often criticizes the sense of greed and naivety born out of the socioeconomic climate of the 80's, Future Funk embraces the "life is a party" atmosphere of the era.

Additionally, the visual aesthetic of Future Funk differs from Vaporwave in that, while it shares its focus on 1980's and 1990's iconography, it does so in a more nostalgic and fun-loving way compared to Vaporwave's more critical and satirical approach. In particular, Future Funk focuses heavily on classic anime such as City Hunter, Kimagure Orange Road, Bubblegum Crisis, and the works of Rumiko Takahashi— with Urusei Yatsura being among the most popular choices for Future Funk.

In short, Future Funk can be considered a Spiritual Antithesis to Vaporwave in that while Vaporwave is cynical and sarcastic, criticizing rose-tinted Gen X & Millennial nostalgia towards the 80's and 90's, Future Funk is much more jovial and celebratory, embracing said nostalgia and utilizing its positive elements to craft a retrofuturist party atmosphere.

See also Synthwave, another Internet music genre with the same origins and aesthetics that Future Funk but with original creations instead of being based on samples as in Vaporwave; Nightcore, the inversion of Vaporwave but also internet-born, sample-based, anime-themed, and upbeat-based as Future Funk; and City Pop, the Japanese Pop Music genre from The '80s that Future Funk is mostly based.

Not to be confused with the 1982 live album

of the same name by the go-go/disco group Experience Unlimited, or nu-disco

, or the Nintendo Hard level from Geometry Dash.

Future Funk in other media