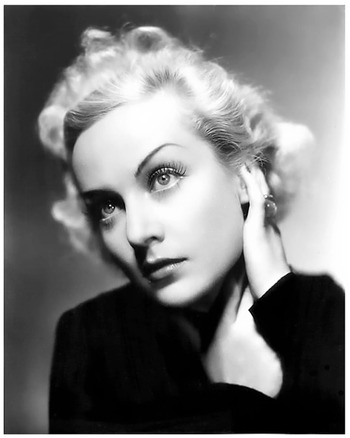 "She was so alive, modern, frank, and natural that she stands out like a beacon on a lightship in this odd place called Hollywood."
— Barbara Stanwyck
Advertisement:

Carole Lombard (born Jane Alice Peters; October 6, 1908 – January 16, 1942) was an American actor during The Golden Age of Hollywood, renowned for her ditzy Screwball Comedy heroines and her playful personality.

Lombard began her film career in low-budget silent 20th Century Fox films playing blonde ingénues and the like. Discovered by Mack Sennett (famous for his two-reel comedies during the Silent Era), she became one of his Bathing Beauties, and honed in her skills as a comedienne during this time.

With the emergence of sound, Lombard transitioned easily, and signed a contract with Paramount in 1930. At this studio, she met and married her first husband, William Powell. By 1933, they would divorce, but continue to be good friends afterwards. She was also good friends with actor/decorator William Haines. When Haines was fired from MGM for refusing to hide his homosexuality, Lombard helped him transition to a successful decorating career by hiring him to decorate her home and having that promoted in film and decorating magazines.

During the early 1930s, Lombard worked in mediocre movies, playing variants on the brainless blonde. All that changed, however, with her breakout hit, Twentieth Century. Alongside the respected actor, John Barrymore, she held her own, and the film not only solidified her star power, but cemented the Screwball Comedy genre. Subsequently, LIFE Magazine crowned her the "Screwball Comedy Queen."

Other classics followed: Hands Across the Table (1935, featuring a young Fred MacMurray), My Man Godfrey (1936, co-starring William Powell), Nothing Sacred (1937, co-starring Fredric March) — the latter being her favourite film. Her daft sense of humour made her a favourite among colleagues and friends alike; she was the glamourous leading lady who loved swearing like a sailor — they called her "the Profane Angel" — who also loved hunting, playing sports, and hanging out with everyone, from the glamourous stars to the crew.

Notoriously, Lombard was also known for her mischievous antics throughout her life and here are just some outrageous examples: on her first and only movie with Clark Gable (No Man of Her Own), she gave him a ham with a picture of him

◊, thinking him a stuffed shirt; she gave director William A. Wellman a straitjacket as a gift during the shooting of Nothing Sacred; Hitchcock was known for his infamous remark about actors being cattle, so Carole brought cattle onto the set

◊, and called one Carole and the other Bob (Robert Montgomery being her co-star); always the attention-lover, she went to a party for a friend who had been released from a sanitarium, arrived in an ambulance, and shocked the guests as she was lifted into the room on a stretcher. Clark Gable, who was also a guest, thought the joke in poor taste.

Late in 1936, though, Lombard and Gable became completely smitten and were soon inseparable. They became Hollywood’s most glamourous couple and got Happily Married on March 29th, 1939.

In the late '30s and early '40s, Lombard tried her hand at dramas, but they failed with the public and critics. Due to these box offices duds, she returned to comedies; her two last were, respectively, Alfred Hitchcock's only straight comedy, Mr. and Mrs. Smith, and Ernst Lubitsch's To Be or Not to Be.

America's entrance into World War II sparked Lombard's patriotism, and she traveled the world to collect war bonds for the effort. After selling more than $2 million war bonds in one night’s rally, Carole, her mother, Bessie, and a family friend/Gable's agent, Otto Winkler, boarded a DC-3 plane to Indiana on January 16, 1942. The plane crashed shortly after take-off; none of the passengers survived. Lombard was only 33 years old.

The country mourned what it considered its first celebrity casualty of the war, Gable was never the same again without her, and the silver screen lost its most revered comedic star.

Carole's influence would continue to be felt beyond the grave, when her best friend Lucille Ball would claim that Carole had appeared to her in a dream and convinced her to "give it a whirl" — it being the new and untested medium of television. The result was I Love Lucy, which came to define the television Sitcom even more profoundly than Carole's own work had defined the Screwball Comedy genre.