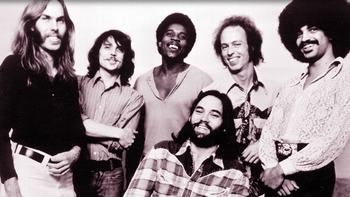 Little Feat is an American rock band that formed in 1969 after its frontman, singer-guitarist Lowell George, was fired from The Mothers of Invention. The band is known for its eclectic sound that mixes elements of Southern Rock, Blues Rock, Funk, R&B, Country Rock, Jazz Fusion, and good old fashioned Rock & Roll.

Rounding out the original lineup was fellow ex-Zappa alumni Roy Estrada on bass, former The Factory bandmate Richie Hayward on drums, and keyboardist Bill Payne, who had tried to audition for The Mothers. The band released two studio albums, their Self-Titled Album and Sailin' Shoes which gained attention for it's surreal Americanic sound, musicianship, and George's songwriting.

Despite critical success, the band struggled to find an audience. As a result, Estrada left to join Captain Beefheart's band. Replacing him was New Orleans native Kenny Gradney, who brought Sam Clayton note brother of vocalist Merry Clayton, the female singer on Gimme Shelter along on percussion, and George's high school classmate Paul Barrere was added as a second guitar. With the expanded lineup, Dixie Chicken saw the band's sound solidify into a more New Orleans oriented style.

While George was the Face of the Band and initial leader and primary songwriter, overtime Payne and Barrere would gradually gain prominence due in large part to George's lifestyle. This would create a large drift in the band, resulting in the band splitting up in 1979. While George desired to reform the group without Payne and Barrere, his death shortly after the split ended any chances of that.

However, the surviving members would reform in 1987 to moderate success and have continued into the present day, even through continuing lineup changes, most notably the deaths of Hayward and Barrere.