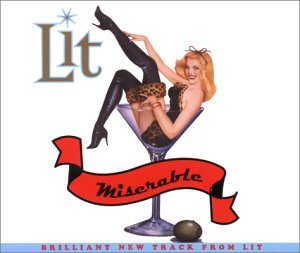 "Miserable" is a single by Alternative Rock group Lit. The song is from their album A Place in The Sun. The song charted #3 on the US Modern Rock Tracks and is one of the band's biggest hits, along with "My Own Worst Enemy".

Although it was a major hit in its own right, the song is best remembered for its Fanservice-heavy music video. It features the band (A.J. Popoff on vocals, Jeremy Popoff on lead guitar, Allen Shellenburger on drums, and Kevin Baldes on bass) performing the song for a giant woman, played by special guest star Pamela Anderson, while climbing on and exploring different parts of her body.

The video helped keep the song holding onto its number three spot just as it seemed like its run was about to peter out, and for many, the video is far more well known than the song itself. It might even be the most well known thing they've ever done.

The video first premiered on Pamela Anderson's show V.I.P. in the episode "Hard Val's Night", shortly before also being shown on Total Request Live and becoming a popular staple of MTV.

The video itself can be viewed on YouTube here

Example of:
Between My Legs