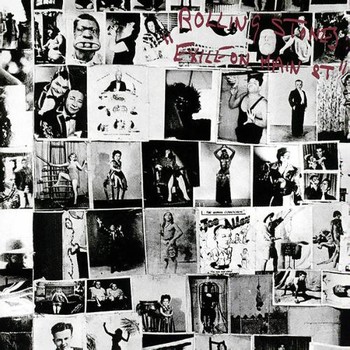 "May the good lord shine a light on you. Make every song your favourite tune."
"I Just Want to See His Face" - that song had a big impact on me, particularly learning how to sing in that high falsetto, the way Jagger does. When he sings like a girl, I go crazy. I said, 'I've got to learn how to do that.' I couldn't really do it until I stopped smoking. That's when it started getting easier to do. [Waits's own] 'Shore Leave' has that, 'All Stripped Down', 'Temptation'. Nobody does it like Mick Jagger; nobody does it like Prince. But this is just a tree of life. This record is the watering hole. Keith Richards plays his ass off. This has the Checkerboard Lounge all over it.
— Tom Waits, who put Exile on Main St. at no. 4 in a list of his personal Top 20 favourite albums, published in The Guardian in 2005.
Advertisement:

Exile on Main St. is the tenth studio album (twelfth American album) by The Rolling Stones, released in 1972. It was mainly recorded at Nellcôte in France, with additional recording at Olympic Studios in London and Sunset Sound Recorders in Los Angeles. Hits and fan favourites include "Tumbling Dice", "Rip This Joint", "Happy", "Sweet Virginia", "Rocks Off" and "Shine a Light".

In 2010, Exile was given a remastered deluxe edition featuring a second disc of outtakes and previously unreleased songs.

I only get my rocks off while I'm tropin':