Music / Derek and the Dominos 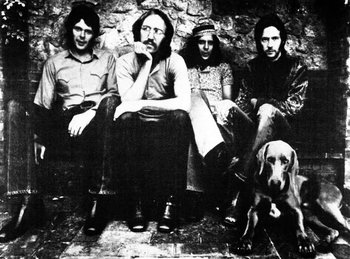 Derek And The Dominos in 1970. From left to right: Jim Gordon, Carl Radle, Bobby Whitlock and Eric Clapton.
"The basic concept of Derek and the Dominos was that we didn't want any horns, we didn't want no chicks - we wanted a rock 'n' roll band."
—Bobby Whitlock
"We were a make-believe band. We were all hiding inside it. Derek and the Dominos—the whole thing ... assumed. So it couldn't last. I had to come out and admit that I was being me. I mean, being Derek was a cover for the fact that I was trying to steal someone else's wife. That was one of the reasons for doing it, so that I could write the song, and even use another name for Pattie. So Derek and Layla—it wasn't real at all."
—Eric Clapton
Advertisement:

After a successful tour backing soul-rock duo Delaney & Bonnie, sidemen Bobby Whitlock, Carl Radle, and Jim Gordon joined Eric Clapton in the studio for his solo debut, Eric Clapton, eventually teaming up to form a then-unnamed band. Word of God on the origin of the final name Derek and the Dominos variesnote  Versions include someone mishearing "Eric and the Dynamos", the combination of the names "Eric" and "Duane", etc. Everyone involved seems to have a different memory of where it came from., with Clapton and Whitlock giving entirely different stories, but whatever the reason, they embarked on an unheralded UK tour before heading for the US to record a debut album. Dave Mason of Traffic and later Fleetwood Mac joined shortly after formation, though he didn't last long. With Duane Allman guesting, the Dominos recorded Layla and Other Assorted Love Songs in Miami during the fall of 1970, releasing the album to lukewarm critical and commercial success before embarking on a successful stateside tour.

The title track's appearance on 1972 The History of Eric Clapton led to skyrocketing sales for Layla and Other Assorted Love Songs and a critical reappraisal as one of the great albums in rock history, but by that point the Dominos had already fallen. Constant cocaine and heroin use took a toll on all of the members, none more so than Radle, who died from kidney complications as a direct result. Clapton was driven into early retirement, the man once considered a god for his playing ability robbed of his skill from heroin abuse (although he eventually recovered and resumed his career). Gordon, suffering from undiagnosed schizophrenia, killed his mother with a hammer and remains institutionalized to this day. Even Duane Allman, never officially a member of the band, lost his life in a motorcycle accident. Only Whitlock remained mostly unscathed (aside from a decade-long feud with Clapton), attempting an abortive solo career early in the decade before rebounding in the late nineties.