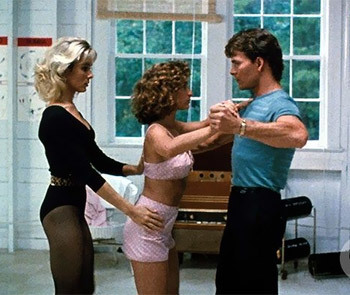 Girl: I'm rich and you're poor, but let's dance together!
Guy: Society won't like it.
Girl: [grabbing him dramatically] I don't care!
— Family Guy (parodying this trope)
Advertisement:

Some media works feature people dancing. This makes a whole lot of sense when the scene is set in a nightclub, a prom, or even a concert. Other times, however, there is an elaborate plot going on upon which the story is concentrating, and there's no time for frivolity because serious business is afoot. And yet dancing has been shoved in there somewhere, even when it feels (or at least should feel) out of place.

Very common in music videos and in films that are about dancing. This trope does not generally apply to musicals (see the Musical World Hypotheses), but it could do if the dancing is diegetic and the plot revolves around it.

Naturally a Sub-Trope of Serious Business. May feature an Angry Dance.