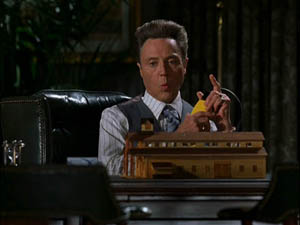 He lives only to destroy their lives.
"If there is anything Three Stooges media has taught me, it's that entertainment always saves heartfelt buildings."
— The Nostalgia Critic, Jem and the Holograms review
Advertisement:

A heartless developer plans to buy out and then knock over the local Orphanage of Love because they haven't paid their bills in ages, possibly with the aid of a Morally Bankrupt Banker, assuming they aren't the same person. Despite the horrible fate awaiting the adorable ragamuffin orphans and their caretakers, it seems all hope is lost. Enter The Hero, almost always a Good Samaritan and Friend to All Children, who will embark upon a quest to gather the necessary funds...or at least stop the developer from being able to knock the place down.

This trope serves a a popular stock plot for a number of reasons. It's a simple enough goal for the audience to grasp and support, plus it's a pretty easy way to establish a black and white, good vs. evil theme. After all, who but a truly good person would devote their time and welfare to saving an orphanage that can't offer much in the way of reward but its gratitude? And who but a truly evil person would dump a bunch of orphans onto the street so they can build a hotel/casino/oil rig/parking lot over it?

Plus, since there's a number of ways to reach this goal, you can pretty much insert any kind of film into it. Want a funny Road Movie? Just have the Hero hop into his van with his quirky sidekick and drive cross-country to pay the rent. Need to sell a soundtrack or musical? Have the centerpiece of the film be a fundraiser concert. Want a Downer Ending drama which explores the good and evil of mankind? Just have the heroes fail and watch the orphans cry their eyes out as their only chance at a loving home gets demolished before their eyes.

This plot doesn't have to center around an orphanage. Another popular variant is saving a family farm, followed closely by a youth or community center. It could be anything, as long as the building or place has someone's welfare tied up into it, there's probably an evil developer lurking in the shadows and planning its demise.

Furthermore, those wily developers don't always need cash. Sometimes, saving the orphanage may require a fight to claim the deed to the building or land, or a battle over a will.

Compare the Childhood Memory Demolition Team where the structure being knocked down isn't necessarily going to result in catastrophic circumstances for anyone. Not typically related to Burn the Orphanage.

open/close all folders
Save The Orphanage

Save the Community Center

Save Various Other Things