Series / Takin' Over the Asylum 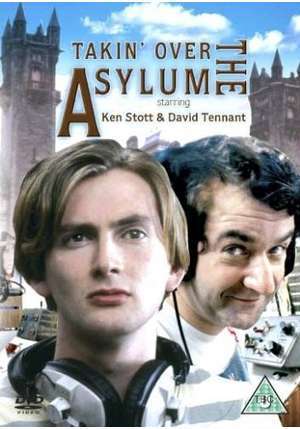 We are loonies and we are proud!
Advertisement:

Takin' Over the Asylum is a six-part BBC drama which asks the fundamental question "What measure is a non-looney?"

Eddie (Ken Stott of Rebus fame) is a double-glazing salesman in Glasgow, who lives with his Grandmother (she lives with him!), drinks too much and whose dreams of being a DJ are dwindling fast with every passing year. After being pushed out of his unpaid spot on a community radio station, he is put in charge of revamping St. Jude's hospital radio - not knowing that St. Jude's is a mental institution. Once there Eddie encounters a slew of inmates; Rosalie the Obsessive Compulsive Neat Freak, Fergus the Schizophrenic electrical genius who puts Steve McQueen to shame, Francine the self-harming depressant with a tragic past and a soft spot for cats, and the enthusiastic manic-depressive Campbell, played by a young David Tennant who is determined that he and Eddie will break into the big-time.

Throughout the series we learn more and more about how the characters ended up in St. Jude's, Eddie learns more about his own problems and starts asking questions about where the line is drawn between sanity and madness. It also has a bunch of your favourite tunes and won more BAFTAs than you could shake a stick at.

Not to be confused with Running the Asylum.