Can THREE Stooges save ONE orphanage from FOREclosure? 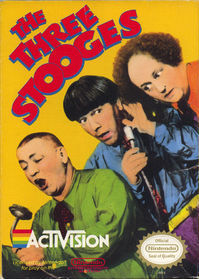 There were two The Three Stooges video games based on the comedy team of the same name. The arcade game was made by Mylstar Electronics and there was the home video game by Cinemaware. The arcade game was called "The Three Stooges in Brides is Brides" and it's a puzzle game. The home console and PC game were composed of minigames played to earn money in order to save an orphanage and put an end to the nasty banker I. Fleecum. The NES version was published by Activision, while budget ports for the Playstation and Game Boy Advance were published by Metro3D in 2004.

Tropes for the arcade game

Tropes for the home console game

One minigame has the Stooges throw pies at customers while avoiding getting hit themselves.

Example of:
Pie in the Face

One minigame has the Stooges throw pies at customers while avoiding getting hit themselves.