Video Game / Defender of the Crown 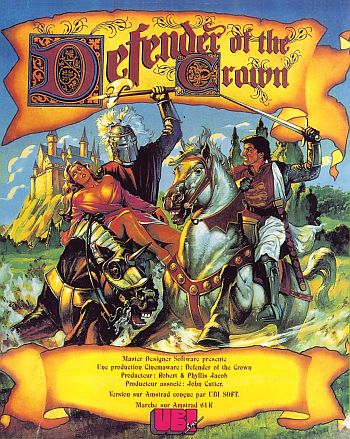 A classic Turn-Based Strategy game produced by Cinemaware in the late 1980s. A sort-of-adaptation of Ivanhoe. While the game is only barely like any of its progeny, it was groundbreaking back in its own days, and it still has nostalgia value to some people.

In Defender of the Crown, King Lionheart has been murdered. Civil war ensues. As a heroic Saxon, you have to defend the English monarchy from the dastardly Normans. (Wait, what? Wasn't Richard Lionheart a Norman? Whatever...)

You collect taxes, buy armies, and send them into battle. Plus, you can also raid castles with your fencing skill or go on a tournament with your jousting skill. If the Normans kidnap a Saxon lady, it's your job to raid their castle to rescue her.

The original Amiga version, whose programmer, Robert J. Mical, also created the Intuition GUI, was published in 1986 after three and a half months of rushed development. Over the next several years, ports for the Atari ST, IBM Personal Computer, Amstrad CPC, Apple IIGS, Commodore 64, and Nintendo Entertainment System were published. Enhanced CD-ROM versions were released for the Commodore CDTV and Philips CD-i after Cinemaware went bankrupt.

A new company that bought Cinemaware's name and assets has released both a remake and a "remastered" version of Defender of the Crown for modern Windows and Macintosh PCs. They also have the original version of the game available to play for free online, here