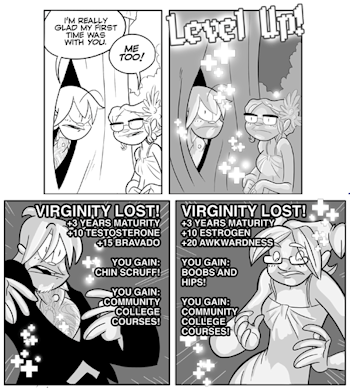 (Results not typical.)
"You fight (the aliens) with giant robots made of weaponized love."
— Ben Lehman, author of Bliss Stage
Advertisement:

There are a lot of games out there that want to encourage relationships, romance, and sex between the characters: a game where you Level-Up At Intimacy 5 actually makes your character stronger or gives them additional capabilities for doing so, usually by having increased Relationship Values correspond exactly to combat modifiers - say, Intimacy Dice in Bliss Stage or the powers of your various Personas.

Usually, the explanation for how hitting on people could possibly make you more powerful is that your Applied Phlebotinum weaponry is powered by intense emotions; sometimes this is coupled with the idea that you're fighting a Being of (Im)Pure Thought.

The purpose of this trope is to encourage a player to take romantic and sexual actions, making it a trope specific to games — a sort of literal interpretation of Friends with Benefits. Dating Sims love this trope, for obvious reasons.

A subtrope of Deus Sex Machina. Can involve Power Perversion Potential. A weaponized verson of The Power of Love, The Power of Friendship, and The Power of Lust. May or may not be Intimate Healing. The opposite of Virgin Power. Often used with You Lose at Zero Trust. When being The Casanova is more effective than being a Dogged Nice Guy, that's More Friends, More Benefits. Compare Optional Sexual Encounter.