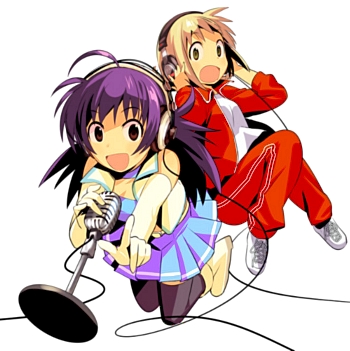 Yutaka Horiuchi was literally on top of the world. A popular idol, she was beloved by countless fans, and was the darling of the entertainment scene, where she was regularly sought-out for various events and projects. However behind her bright and friendly public persona lurked a deeply cynical young woman with a huge chip on her shoulder, and whose prime motivation was the accumulation of money and fame, in that order.

When her management suddenly saddles her with a radio show, she's suitably disapointed because the pay wasn't that good to begin with. But when a food poisoning-related incident nearly dooms the show before it starts (and forces Yutaka to make a prolonged stay in the ladies' room), the production staff somehow manage to salvage situation by using a chance discovery... That one of their assistants, Harumi Tanaka, shared the same voice as her! Yutaka wasn't pleased of course, and then promptly quit. It was just one dinky radio program, after all. She had other jobs she could turn to anyway...

And then everything suddenly came tumbling down.

The president of her talent firm skips town, and what's more, leaves Yutaka saddled with all of the company's debt. With her reputation ruined, all she had left was the same radio show she so casually disregarded, but this time around, she had Harumi to help her through this low spot in her career. Can she ever go back to being a top idol though just through the show? Yutaka wants to try anyway.

Written and drawn by Keiji Watarai, O/A (オー・エー) was serialized in Young Ace magazine from November 2009 to September 2012. The manga is considered complete, with seven compiled volumes released. A radio drama based on it also aired in 2011 on True Comic Weekly+ Kai (真・週刊コミックTV＋版).