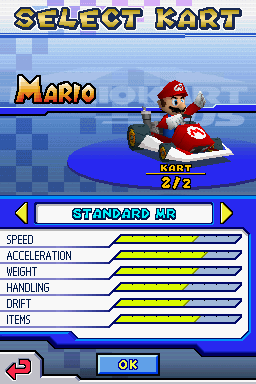 It's-a me! The balanced one!
"Calo and Galdo are silver at all trades and gold at none."
— Father Chains, The Lies of Locke Lamora
Advertisement:

Quite often, this character is the baseline to get the hang of the controls, since they lack the extremes that might trip up a novice. They're also a solid choice for advanced players who want the flexibility to exploit an enemy's weakness, no matter what that weakness may be. Whether the character retains their usefulness as the player's skill grows depends on how much the game rewards versatility as opposed to pure power, but the Jack-of-All-Stats is almost never the best character in any given game or a Game-Breaker. They may have trouble dealing with characters whose skills are more extreme than theirs if they're allowed to press their advantages. Some games tout the Fragile Speedster as great for beginners, while the Mighty Glacier is for experts only. In other games, the Fragile Speedster can be tough to control while the Mighty Glacier is easier to handle. In either case, the Jack-of-All-Stats is an all-around safe bet for anyone.

In games with multiple playable races, it is often the case that Humans Are Average and are therefore the Jack-of-All-Stats race. It's common for humans to be a compromise, stat-wise, between the classic dichotomy of elves, who are graceful and fragile, and dwarves, who are strong and slow.

Another strength that helps the Jack-of-All-Stats is resistance to changes brought about by patches or Metagame discoveries that would reduce or remove the need for a specialist class. The Jack-of-All-Stats can, and often will, become a Master of All if given enough time and effort, although this is usual much more expensive in comparison to a specialist class. In some cases their versatility also overlaps in Confusion Fu, as their ability to fill a variety of roles with a wide range of techniques can make understanding their full capabilities much harder, but either way, they can also fall into their own category of Difficult, but Awesome due to the fact that because they are so balanced, they lack specialization. This in theory would mean more specialized characters can fall back on one thing the balanced ones can also do, only on a much more effective scale. This would mean this archetype have to rely on a lot more work to do well against said specialists, or even against themselves with a lot of fundamentals or out-of-the-box tactics. On the other hand, some of these characters can fall into the Skill Gate Character since their versatility allows newer players to explore different gameplay styles as well as exploring the player's strengths and weaknesses.

See also Necessary Drawback, PVP Balanced, Always Someone Better, Humans Are Average, and Non-Elemental. Compare the Master of All and Lightning Bruiser, who can do everything better, and Master of None, who does everything worse (basically the same as this trope except it works against the character). Often overlaps with the Standardized Leader. Multiform Balance can let a character be this, but often they can only cover one area at a time. Compare The Red Mage. Contrast Crippling Overspecialization.

Alternative Title(s): The Balanced One, Jacks Of All Stats