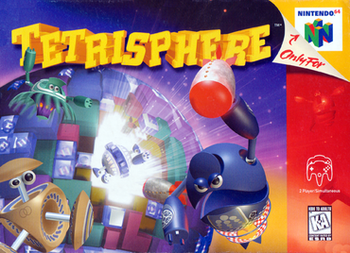 Tetrisphere is a Falling Blocks game for the Nintendo 64 developed by H2O Entertainment. It takes the classic Tetris and adds many new twists. Gameplay is from the top-down perspective of the falling block, the field is a sphere covered with blocks, and the player clears pieces by shifting them around so that pieces of the same kind are touching, then dropping a piece onto the result. The goal is usually to uncover a certain area or amount of area of the core.

The player can play as any of seven spherical transforming robot characters, each with a balance of speed (general speed) and power (speed when moving a block).

There are five single-player game modes: